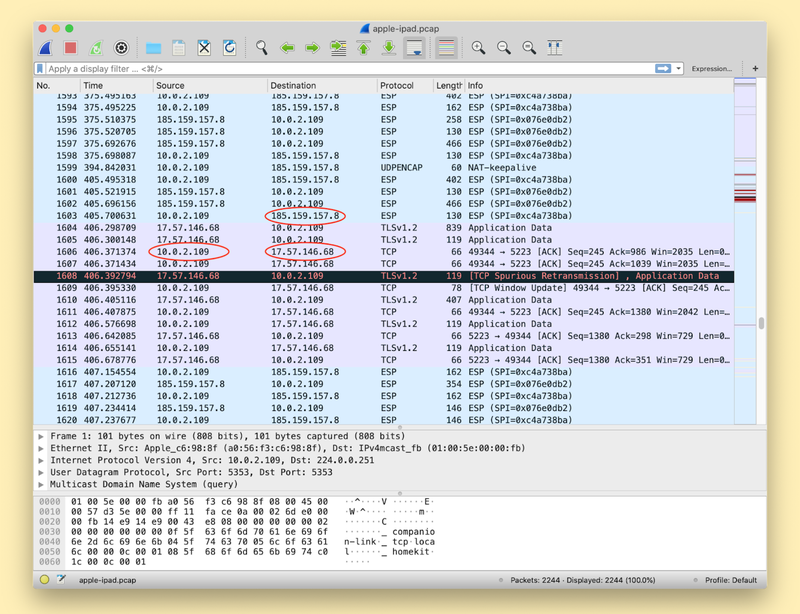 A screenshot from ProtonVPN demonstrating exposed connections to Apple's servers that should be protected by the VPN
Details on the vulnerability were shared today by Bleeping Computer after it was discovered by ProtonVPN. The vulnerability is caused because iOS isn't terminating all existing connections when a user connects to a VPN, allowing them to reconnect to destination servers once the VPN tunnel has been established.

Connections made after connecting to a VPN on an iOS are not affected by this bug, but all previously established connections are not secure. This could potentially lead to a user who believes they are protected accidentally exposing IP an address and therefore, an approximate location.

Apple's Push Notifications are cited as an example of a process using connections on Apple's servers that aren't closed automatically when connecting to a VPN, but it can affect any app or service running on a user's device.

VPNs cannot work around the issue because iOS does not allow VPN apps to kill existing network connections, so this is a fix that will need to be implemented by Apple. Apple is aware of the vulnerability and is looking into options to mitigate it.

Until fixed, VPN users can connect to a VPN server, turn on Airplane Mode and then turn off Airplane Mode to kill all existing connections. The mitigation isn't entirely reliable, however, so iPhone and iPad owners who rely on VPNs should be careful until Apple puts out a fix.

This is 100% fake and not a bug. All VPNs, such as those on the desktop, do this by default unless specifically configured, as to not interrupt ongoing downloads, or worse, cause UDP-based services to silently fail.

I don’t think so.
iOS used to handle this correctly, then stopped.
Not tearing down existing connections completely undermines the point of a VPN.
Score: 10 Votes (Like | Disagree)

Well, I can tell you that Anyconnect will tear down any active connections, assuming it’s configured correctly. My work VPN certainly does.

TCP is designed to retry after being torn down. It’s no biggie.

The fact is, this is an iOS bug, which was introduced recently.
Score: 5 Votes (Like | Disagree)

konqerror
This is 100% fake and not a bug. All VPNs, such as those on the desktop, do this by default unless specifically configured, as to not interrupt ongoing downloads, or worse, cause UDP-based services to silently fail. Windows built-in VPN client has this exact same behavior.
Score: 4 Votes (Like | Disagree)

If a VPN is configured to send all network traffic through the VPN when it’s running - which is typically what‘s done - then all traffic should be routing through it from the moment it’s enabled. Not just connections to new end points established afterward - all traffic.

Even if a VPN is configured to just carry traffic to a few specific end points (such as the OpenVPN tunnel to our servers, which I’m relying on heavily right now due to the stay at home order currently in place here in Washington): if you’re already connected to one of those end points before establishing the tunnel, you would expect all further traffic to go through the tunnel. The idea that you wouldn’t is ludicrous.
Score: 3 Votes (Like | Disagree)

As others have said, it would be problematic to silently kill existing connections when connecting to a VPN. That's certainly not the behavior I would expect. I suppose it depends on whether you use a VPN to add certain networks (such as your corporate office), or to globally route all your traffic (such as for privacy reasons). In the former case, I don't want my non-office connections to be reset.

If MacRumors is reporting this right and VPN apps cannot reset connections, that makes me wonder what changed here. Did iOS previously indeed terminate any open socket when connecting?

I feel that people need to learn about the expected behaviour of VPNs before commenting.
There’s actually two types on iOS. Split vpn and full tunnel. Split allows some stuff to be routed elsewhere. Full tunnel tunnels everything.
Score: 3 Votes (Like | Disagree)

Square-Eyes
I got caught out by the fact that if you tether a device to your phone it will bypass the phone’s VPN ??‍♂️
Score: 2 Votes (Like | Disagree)
Read All Comments