The Thunderbolt 3 standard has been available for roughly four years now, but cable lengths have so far generally been limited to a couple of meters due to signal degradation over long distances of copper wiring. While the use of copper Thunderbolt 3 cables limits their length, it does allow for additional features like the ability to carry power and fallback use of USB modes at slower speeds. 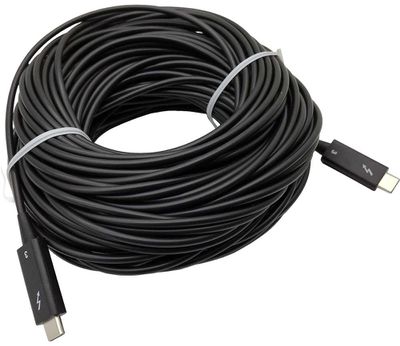 Areca's 30-meter optical Thunderbolt 3 cable
There is an alternative to copper cables that allows for longer cable lengths, and that's optical fiber cables, which use light to transmit signals over long distances with high fidelity. While there have been optical versions of Thunderbolt 1 and 2 cables, the Thunderbolt 3 standard has been very slow in seeing optical cables come to market.

The market for optical Thunderbolt cables is relatively small given their expense and the fact that the vast majority of users have no need to run cables longer than a couple of meters, but for those who do need long cables, the wait for Thunderbolt 3 cables has been a long one.

That wait finally appears to be coming to an end, however, as we're starting to see signs of the cables coming to market. Taiwanese company Areca has recently launched optical Thunderbolt 3 cables, available in 10-, 20- and 30-meter lengths. The cables are available through B&H, but with pricing coming in at $559, $699, and $799 respectively, these are obviously only for pro-level users who absolutely need the highest performance over long distances. And remember that these cables can only carry Thunderbolt 3 data and don't fall back to USB or provide power to or from connected devices.

B&H currently lists expected availability of 7-10 business days on all three cable lengths, and Areca told me a few weeks ago that supplies were somewhat constrained as its factories were still trying to ramp production back up. Areca tells me that beyond the cables that have shown up at B&H, the company is also planning a special-order 50-meter cable and has also been considering a shorter 5.5- or 6-meter cable, although the minimal price difference between that and the 10-meter version may not make it worthwhile.

Corning's optical Thunderbolt 3 connectors
One of the major optical cable manufacturers users have been looking to for Thunderbolt 3 cables is Corning, and it appears its cables may be close to coming to market as well. One MacRumors reader let us know that Corning's cables have started appearing on websites of some European resellers like MacConsult in lengths ranging from 5.5 meters to 50 meters. Based on these listings, Corning's pricing looks like it will be starting at around the equivalent of $400 in the U.S., a bit less than Areca but still out of the range of the average consumer.

Corning tells me that while samples of its optical Thunderbolt 3 cables have been shown at trade shows over the past couple of years, it's not quite ready to officially launch them and shared the following statement:

Corning’s Thunderbolt 3 cables have not yet been launched publicly, although we have shown preliminary samples at industry events. We look forward to their launch, although a date has not been scheduled.

It seems likely that Corning is still awaiting final certification from Intel and that a distributor may have gotten a bit ahead of itself in pushing out preliminary listings to some resellers, but hopefully we can expect Corning's cables to hit the market fairly soon.

The annual NAB show in April would have been a good opportunity for Corning to launch its cables if final certification from Intel was imminent, but as with nearly every other trade show, NAB 2020 has been canceled, so we'll have to wait and see what Corning's plans are.

Optical Thunderbolt 3 cables are hitting the market just as Intel has started teasing Thunderbolt 4, although it's unclear what the differences between the two versions will be, as they appear to offer the same maximum transfer speeds. USB4 is also coming to market in the relatively near future and will essentially unify Thunderbolt 3 and USB with Thunderbolt 3's theoretical maximum 40 Gb/s speeds.

ruka.snow
Ah great. I can finally put my eGPU in the attic so it is silent.
Score: 19 Votes (Like | Disagree)

gnomeisland
Just bought *another* corning TB2 cable. Tried to get one of these just to avoid Corning but I my host device is still TB2 (Mac Pro 2013). Here's hoping these are more reliable. The expense and poor reliability is painful.

Can anybody give examples of uses for these cables?

Music studios. I need one so that I can put my Mac Pro outside of my recording booth and still have a full hub with monitors, etc. inside the booth while I record. Fans are the enemy of good sound.
Score: 7 Votes (Like | Disagree)

lunarworks
This isn't to hook up your home theatre system. This is for professionals with a serious need who can budget that price no sweat.

Also, it's funny because Thunderbolt, or LightPeak as it was known at the time, was originally designed around fibre optics.
Score: 5 Votes (Like | Disagree)

Can anybody give examples of uses for these cables?

Dedicated point to point networking, when you need to copy very large files between systems.

The enemy is voltage drop (and heat) from resistance in the copper wires. If the copper wires were big enough, maybe. But DC (direct current) is especially bad at this with long cable runs.

Would be cool if there was a way to send power over the fiber with photons. They can probably do that on Star Trek.

I think they have these things called solar panels. It might kind of work. It would not be practical.

So, they're optical cables, and the article makes a point of showing "Corning's optical Thunderbolt 3 connectors", but is there really light coming out of the end of these cables, or are there instead optical-electrical transceivers in the enlarged hoods of the connectors, and it does a normal electrical USB-C/TB3 connection at each end?

Even the copper versions are not passing the signals directly. The ends take the signal from the computer, do compression, multiplexing and stuff, the other end puts it all back together. The ends are actually complex/smart electronic devices.
Score: 4 Votes (Like | Disagree)

Can they not run copper along side the fiber for power?

The enemy is voltage drop (and heat) from resistance in the copper wires. If the copper wires were big enough, maybe. But DC (direct current) is especially bad at this with long cable runs.

Would be cool if there was a way to send power over the fiber with photons. They can probably do that on Star Trek.
Score: 4 Votes (Like | Disagree)

Another big question: will these run the XDR in 6K ?
(which is TB3, but quite picky on how it's connected and e.g. doesn't allow an intermediate device and still run at 6K)

I can confirm that the Areca TB3 Optical Cables currently DO NOT support 6K resolution on the Apple Pro Display XDR. I purchased the 30m version, and also tested the shorter lengths with the company's sales rep, with my XDR and 2019 Mac Pro with Radeon Pro Vega II - we could only ever get 5K resolution on the XDR. This was with a virgin machine and with nothing other than bluetooth mouse/keyboard connected to it. Areca/Tekram is aware of the issue and has said that it is a cable firmware issue, and that they are currently trying to resolve. I would make sure to confirm with them that this is resolved before you purchase for use with an XDR display. I intended to use it for a remote display application and ultimately had to return the cable.
Score: 3 Votes (Like | Disagree)
Read All Comments