Early January always sees a flurry of news coming out of CES, but that wasn't all that was on the docket this week. Additional topics of interest in this week included new emoji personalization options for AirPods charging cases, "iPhone 9" rumors, and an upcoming change to Apple's serial number format.

CES 2020: New HomeKit Accessories, Wireless Chargers, and Other Cool Tech From the Show

CES week has wrapped up in Las Vegas, where thousands of tech companies both small and large unveiled their latest products and concepts. As usual, Apple did not have a booth at the trade show, but a wide range of HomeKit-compatible smart home products and accessories for products like the iPhone and Apple Watch were unveiled over the past week. 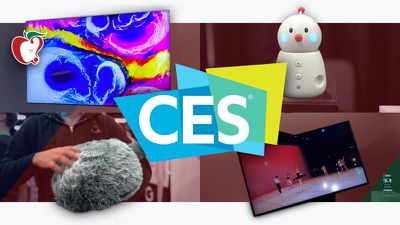 Here are some of the most popular CES stories on MacRumors this week, plus three videos with cool tech from the show:

Aura Smart Strap for Apple Watch to Launch in March

Last year, startup Aura introduced a "smart strap" for the Apple Watch, designed to measure weight, water, fat, and muscle via electrodes built into the band. At CES this week, Aura said the strap is set to launch in March, with pre-orders available now for $99.

Body composition and hydration is not something the ‌Apple Watch‌ can track on its own, though testing will need to be done to see how accurate the Aura strap is in practice.

Addressing the situation, Apple this week launched a replacement program that allows iPhone XS, iPhone XS Max, and iPhone XR users who have run into these problems to receive a free replacement case. Customers will need to visit an Apple retail store or authorized service provider to have their cases inspected and ensure they qualify for the program.

Apple this week announced that its Apple TV app will be available on select LG, Sony, and Vizio smart TVs later this year. Apple shared the news in a press release highlighting the success of its various services.

When available, the Apple TV app will allow owners of newer LG, Sony, and Vizio smart TVs to stream Apple TV+ shows and movies, use the à-la-carte Apple TV Channels feature, access their iTunes libraries of movies and TV shows, and buy or rent more than 100,000 shows and movies from the iTunes Store.

TiVo, meanwhile, has said that the Apple TV app that it promised back at CES 2019 is no longer something it is focusing on right now.

iPhone 9 May Be Slightly Thicker Than iPhone 8

OnLeaks, a well-known leaker who shared accurate renders of the iPhone 11 Pro over nine months before the device was unveiled, has returned with new concept art for the so-called "iPhone 9" or "iPhone SE 2."

In line with earlier predictions from analyst Ming-Chi Kuo, OnLeaks expects the iPhone 9 to resemble the iPhone 8, including a 4.7-inch LCD display with thick bezels, Touch ID home button, and single-lens rear camera, but with a faster A13 chip, 3GB of RAM, and no hardware-based 3D Touch.

OnLeaks also expects the iPhone 9 to be 7.8mm thick, which would be 0.5mm thicker than the iPhone 8. The device will launch by the end of March, starting at around $399, according to Ming-Chi Kuo.

In an internal memo obtained by MacRumors, Apple has indicated that it plans to update its serial number format to a randomized alphanumeric string for future products starting in late 2020.

Apple says all serial numbers that exist before the change is made will remain the same.

Apple already uses alphanumeric serial numbers, but it has long been possible to determine the date and location that a product was manufactured based on the current format. Readers would often use serial numbers to glean more information about their devices, like the iPhone or MacBook Pro.