During the January 2019 CES event, TiVo demoed a TiVo app to the Apple TV, but a year later, the project is "in limbo" and an Apple TV app is no longer being actively developed.

In an interview with TechHive at CES 2020, TiVo vice president of consumer products and services Ted Malone said that while ‌Apple TV‌ app plans haven't been canceled, it's not TiVo's focus at this time. 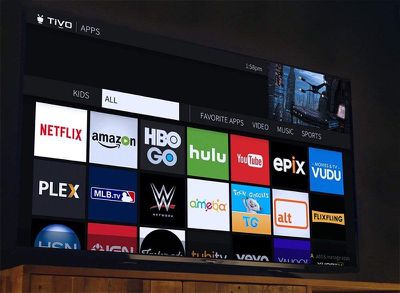 "My bet is we'll get Android, and because of that we'll get the Fire TV, because it's the same app, just different qualifications," Malone said. "I think Roku and Apple are in limbo."

TiVo had initially planned to release new apps for Roku, ‌Apple TV‌, Fire TV, and Android TV at some point in 2019, allowing TiVo users to access TiVo DVRs on other TVs throughout the home without the need to purchase TiVo Mini boxes, but limited resources, technical challenges, and strategy changes have delayed those plans.

According to Malone, TiVo has to transcode video before sending it to other devices, which results in quality and performance issues that TiVo has not been able to resolve. The company has also been working on the TiVo Stream 4K and the TiVo+ streaming service, and an ‌Apple TV‌ app is not a priority.

Malone said that TiVo needs to "double down" on the streaming market and not get distracted by a "bunch of things people want, but aren't really going to move the needle."

Malone said that TiVo needs to "double down" on the streaming market and not get distracted by a "bunch of things people want, but aren't really going to move the needle."

That's funny. I've "wanted" to use TiVo services for the last 13 years. I've "wanted" to give them money for said services. Giving people what they want so that they continue to give you money isn't a bad thing. It's why they're a company in the first place - they had something people wanted.

However, their inability to be a modern technology company and instead 'double down' on streaming (because they're absurdly late to the game) is going to be their downfall. No one wants their streaming device. There's enough of those out there already. They need to focus on their services, because thats the core of their business. They need to understand that cord cutters are not their market, and focus on those who still use Cable TV. It's a dying business, but it's not going to be dead any time soon. Either way, TiVo won't survive, especially under this leadership.
Score: 11 Votes (Like | Disagree)

TiVo just doesn’t get it...users don’t want a TiVo app for the Apple TV. They want an Apple TV app for the TiVo. Simplicity.

I have a 6-tuner TiVo in the living room and a TiVo mini + Apple TV in most of the bedrooms/office. I was looking forward to selling the TiVo minis and being able to do everything on the Apple TV.

For folks new to TiVo, being able to watch on other TVs (using an Apple TV, Roku, or Fire TV app) without needing to drop $179 for a TiVo Mini seemed like it would make TiVo that much less expensive to get into.
Score: 9 Votes (Like | Disagree)

Len Banks
As a VERY longtime user of TiVo, the company is always flirting on the edge of being truly wonderful and then they do some bone-headed thing to ruin it. I don't see why I would want a TiVo app on my AppleTV, but I sure would like an AppleTV+ and Disney+ app on my TiVo. THE STUPID TiVo+ is a an annoying joke and and the pre-roll ads for a PAID service is outrageous. I would cut the cord in a second and leave TiVo and Comcast if it wasn't for the SKIP commercials feature and the HORRIBLE Apple TV remote.
Score: 9 Votes (Like | Disagree)

macpro2000
TiVo just doesn’t get it...users don’t want a TiVo app for the Apple TV. They want an Apple TV app for the TiVo. Simplicity.
Score: 8 Votes (Like | Disagree)

a "bunch of things people want, but aren't really going to move the needle."

Wow. If they think allowing Apple users who want to access their TiVo recordings in the seamless, convenient way they prefer won’t be good for business, then I think they are confused. Apple users are consistently one of the most active and valuable segments of tech users, and it seems like suicide not to serve them. TiVo was a brilliant idea that changed media consumption, but the way they’ve run their business since then has left them on the outside looking in. They need to embrace the ways their customers want to consume and use their TiVo content. Not see it as a burden.
Score: 7 Votes (Like | Disagree)
Read All Comments