Apple has marked the close of a "historic 2019" for its services offerings with a press release celebrating Apple Arcade, Apple TV+, Apple News+ and Apple Card, as well as the continued success of its App Store, Apple Music, and iCloud. 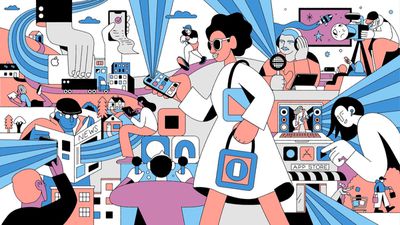 "2019 was the biggest year for Services in Apple's history. We introduced several exciting new experiences for our customers, all while setting the standard for user privacy and security," said Eddy Cue, Apple's senior vice president of Internet Software and Services. "We begin the new decade with incredible momentum and gratitude to our customers who have shown such enthusiasm for all of our Services, and we continue to celebrate the work of the world's best creators, storytellers, journalists and developers."

Here are some key takeaways from Apple's services highlights of 2019, including some things that the company says customers can look forward to in 2020:

During its last earnings call of 2019, Apple revealed that in the fourth fiscal quarter of 2019 its services segment brought in $12.5 billion, up from $10.6 billion in the year-ago quarter and $11.46 billion in the third quarter of 2019. Services grew 18 percent year-over-year, and Apple said that it saw growth in all regions around the world.

Apple CEO Tim Cook said that almost every one of Apple's services had set new all-time revenue records, including its search ad business, ‌‌Apple Music‌‌, Apple Care, cloud services, and the ‌‌App Store‌‌. Apple's services category is now the size of a Fortune 70 company by revenue.

This fiscal quarter sounds like a blockbuster. What a difference year makes.

And guess what ... notice the hate against Cue has also died down? No major hit to their internet services, app store, online store, logistics in shipping has incredibly improved ... Apple Music is STILL improving and users are keeping their registrations.

Some investors keep thinking Apple is turning into a services company (incl Bloomberg) yet that's NOT the case. They make Software, and design the hardware to bring the best software they can. Now their doing the same with content/software in order to bring the best SERVICES they can vs the competition.
Score: 6 Votes (Like | Disagree)

I7guy
This fiscal quarter sounds like a blockbuster. What a difference year makes.
Score: 4 Votes (Like | Disagree)

This fiscal quarter sounds like a blockbuster. What a difference year makes.

I hope so. This could be a statement designed to keep investors calm when they have their earnings call later this month. "Some of our sales were miserable, but did you hear how good our services are doing?" Or, "Services were great, but yeah...they didn't really bring in the money."

Has Apple made one of these statements in prior years, or is this something new? I'm looking forward to the earnings call at the end of the month. Sure hoping for this news to carry over to that (and of course the prediction for the next quarter...they only thing analysts seem to care about).

Devyn89
I think Apple TV+ is growing into my favourite streaming service :O. See and The Morning Show have been amazing so far. I just started watching Dickinson which is pretty funny and I’m excited to see Little America when it comes out.
Score: 2 Votes (Like | Disagree)

FairlyKors
Is anyone else tired of the type of garbage illustration/animation similar to the kind we see posted here with this article? I understand “crap illustration” can be a stylistic choice, but it seems so pervasive that all I can think is that the demand for illustration and animation far exceed the talent available. VICE networks now seem to use nothing but stoned 6th graders to illustrate their series. And that’s just the tip of the iceberg. The NYT and New Yorker also employ what seem to be children high on psychedelics to do serious illustration and graphic design work. I can’t imagine any of this (perhaps) intentionally sloppy, goofy, dorky work aging well at all, considering it looks like a pile of **** right now. Just in my humble opinion, of course.
Score: 1 Votes (Like | Disagree)
Read All Comments