In addition to select LG smart TVs, Apple today announced that its Apple TV app will be available on select Sony and Vizio smart TVs later this year. Apple shared the news in a press release highlighting the success of its various services. 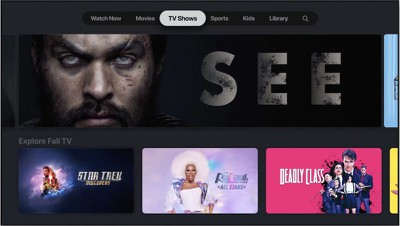 When available, the Apple TV app will allow owners of newer LG, Sony, and Vizio smart TVs to stream Apple TV+ shows and movies, use the à-la-carte Apple TV Channels feature, access their iTunes libraries of movies and TV shows, and buy or rent more than 100,000 shows and movies from the iTunes Store.

The Phazer
It'll be nice to watch

Let's hope for a seamless experience, but I fully expect to suffer through a poorly designed proprietary interface with Sony (or worse, Samsung).

Wha? You can pin the app to the top row and literally press enter. The UI in the app will be written by Apple. If it's poorly designed and proprietary it'll be on them.

Anyway, it'll be nice to access free 4K upgrades via iTunes on my TV without a separate box. Neat.

Later this year... the year has just started so that's a long way away. This should have been available to download on launch day.

Given this has been announced so early in the year I think it's very (very) likely Apple signed an exclusivity agreement with Samsung until the end of 2019.
Score: 5 Votes (Like | Disagree)

JohnApples
Well shoot, that’s awesome. I was considering buying an AppleTV 4K for my Vizio as I’m not a huge fan of AirPlaying content to the TV, but this would negate that purchase.

Being able to natively access my iTunes content and ATV+ Right from the home screen of my TV would be very convenient.
Score: 3 Votes (Like | Disagree)

Manzanito
Still waiting for the firmware update that was to be released later last year on Sony tvs.:rolleyes:
Score: 3 Votes (Like | Disagree)

gazwas
Love to see the list of supported TV's however, still waiting for the Pie 9.0 update here in the UK which I imagine it runs on.
Score: 3 Votes (Like | Disagree)

Love to see the list of supported TV's however, still waiting for the Pie 9.0 update here in the UK which I imagine it runs on.

Ask and you shall get! (I contacted Sony yesterday using their chat and I was told it would roll out fairly soon.)

Interesting. As new Sony TVs use Android TV I wonder if they’ll bring the app to the Nvidia shield?

My question exactly, I have three Sony TV's all with Android. I would love to ditch my non-4k Apple TV's and watch natively on the TV. Does the Samsung and Roku apps support 4k and Atmos?
Score: 1 Votes (Like | Disagree)
Read All Comments

Sunday June 20, 2021 4:15 am PDT by Tim Hardwick
A wireless network naming bug has been discovered in iOS that effectively disables an iPhone's ability to connect to Wi-Fi. Security researcher Carl Schou found that after joining a Wi-Fi network with the name "%p%s%s%s%s%n" his iPhone's Wi-Fi functionality was left "permanently disabled." Changing a hotspot's SSID did nothing to correct the problem, with even a reboot failing to make a...
Read Full Article • 130 comments