In what has become an annual tradition, car audio brands like Alpine, Pioneer, Jensen, and JVC/Kenwood are showcasing new aftermarket CarPlay and Android Auto receivers at CES in Las Vegas this week.

Alpine is debuting a new CarPlay and Android Auto receiver with an 11-inch capacitive touchscreen, which it claims is the largest on the market, offering 49 percent more surface area than its 9-inch receivers. The display hovers over the dashboard, allowing it to be placed in most vehicles without the need for custom installation. 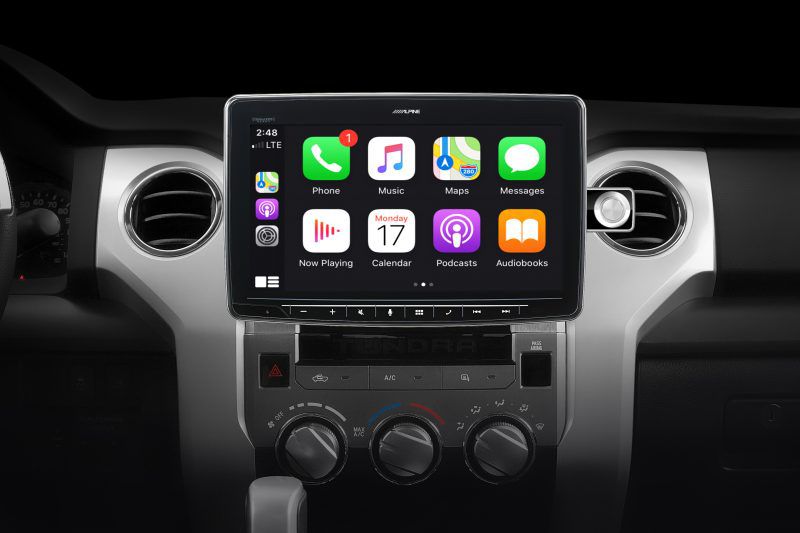 The display is attached to an adjustable mount that is connected to a traditional single-DIN chassis. It can be tilted at four pre-set angle points to better match the tilt and height of the dashboard.

Other features of the iLX-F411 include a mech-less design with no CD/DVD slot, Bluetooth music playback, SiriusXM readiness, a USB-A port, an AUX input, one HDMI input and one HDMI output, and one rear-view camera input. When not in CarPlay mode, the receiver has a customizable user interface with 22 available widgets.

Pioneer is showing off five new CarPlay and Android Auto receivers at CES, including the DMH-WT8600NEX, a 10.1-inch model with a 720p capacitive touchscreen. Like the Alpine receiver above, the display hovers over the dashboard, allowing for it to have a traditional single-DIN chassis with no custom installation needed.

Image via CEoutlook
The DMH-WT8600NEX supports both wired and wireless CarPlay, according to Pioneer. This means an iPhone can be connected to the receiver with a Lightning to USB cable or wirelessly via Bluetooth and Wi-Fi.

Pioneer says the DMH-WT8600NEX will have a suggested price of $1,200 in the United States, but it is unclear when it will be available. Pioneer is also releasing two 6.8-inch and two 9-inch receivers as part of its 2020 lineup.

Jensen and JVC/Kenwood are also launching new CarPlay receivers at CES this week.

My Tesla’s got a bigger screen and is more useful. I’d take a hard pass people. They’re mugging us all off nowadays.

uh yah. I don’t think you’re the target demographic. But hey I was gonna spend $1,200 on one but you make a good point I’ll just spend 70k on a Tesla instead.
Score: 8 Votes (Like | Disagree)

These companies are a rip-off. Last year or the year before I asked for one without a CD reader to save on cost. This year they take away the reader and charge more. Ridiculous.

I just want a ~7" CarPlay Wireless receiver for like $399 with capacitive touch and no CD reader. 720p should be barely passable on a 7" display but is ridiculous on a 10". Until then I'll just keep using my iPhone in my iOttie wireless charging mount. I just sucks because I often have to use Siri to control the music which I sometimes have issues with in the car.
Score: 5 Votes (Like | Disagree)

My Tesla’s got a bigger screen and is more useful. I’d take a hard pass people. They’re mugging us all off nowadays.

Considering these are primarily for DIN'd vehicles, they're more likely taking a hard pass on you and your Tesla.
Score: 5 Votes (Like | Disagree)

Let’s ignore pricing for a moment. Are cars even made with DIN bays/slots anymore? I haven’t seen any in the last decade. Who are they targeting, here?

Third-party install kits provide a DIN slot to vehicles without one.

jessea
The Alpines don’t even have wireless CarPlay. You have got to be kidding.

If only Apple would release a head unit...

gplusplus
Let’s ignore pricing for a moment. Are cars even made with DIN bays/slots anymore? I haven’t seen any in the last decade. Who are they targeting, here?
Score: 2 Votes (Like | Disagree)
Read All Comments

Tuesday April 7, 2020 7:00 am PDT by Eric Slivka
Rumors of Apple-branded over-ear headphones have been circulating for quite some time, while more recent rumors have mentioned an "AirPods Pro Lite" that could also be in the works, and Twitter leaker Jon Prosser's recent foray into Apple rumors provides a bit more detail on what we might able to expect for these products. Current Beats Studio3 Wireless and BeatsX On the over-ear side,...
Read Full Article • 69 comments