LG recently rolled out a firmware update to customers who own an LG TV in the UHD UM7X series, enabling HomeKit and AirPlay 2 functionality. LG originally said that this firmware update would be available in October, but the software has come out early. 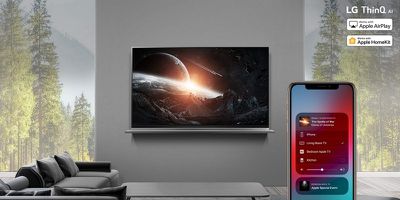 With ‌AirPlay‌ 2, LG TV users can stream TV shows and movies from an iOS or macOS device directly to the television, with no Apple TV set-top box required. A movie can be started on an iPhone and AirPlayed right to a TV, plus content can be mirrored from a Mac or iOS device to the TV.

The ‌AirPlay‌ 2 functionality in LG TVs is linked to ‌HomeKit‌, so LG TV sets with the new firmware will show up in the Home app on ‌iPhone‌, iPad, and Mac. In the Home app, LG TV users can do things like switch inputs, turn the television on and off, and adjust the volume. Siri can also be used for these commands, so a simple "Hey ‌Siri‌" voice request on an iOS or macOS device can adjust the volume or turn the TV on or off, much like other ‌HomeKit‌ products.

LG also plans to enable ‌HomeKit‌ and ‌AirPlay‌ 2 support on its LG UHD UM6X series television sets as well as the LG NanoCell SM83 series or below, but those software updates have yet to be released.

I have a B8 model bought last fall. Not a peep. I am sure its processor is up to speed. What say you, [S]Apple [/S]LG?

I’ll just throw in C7 support would be nice although I know there’s zero chance of that happening as even the C8 and similar are very unlikely to get the upgrade.

Planned obsolescence sounds like a looney conspiracy theory - until it punches you in the face. ;)
Score: 2 Votes (Like | Disagree)

And like a sucker, I upgraded my only-two year old TV to a 2019 model in anticipation of Airplay for Sony TVs. I should have known better.

Yea we bought one too. I feel your pain. Perhaps they will release an update later this year. I’m sure Sony has their engineers working overtime. Poor sods. And I bet management is what’s holding everything back.
Score: 1 Votes (Like | Disagree)

And like a sucker, I upgraded my only-two year old TV to a 2019 model in anticipation of Airplay for Sony TVs. I should have known better.
Score: 1 Votes (Like | Disagree)

Incredible not even rumors for 2018 tvs. I have C8 model.

I have a B8 model bought last fall. Not a peep. I am sure its processor is up to speed. What say you, Apple?
Score: 1 Votes (Like | Disagree)
Read All Comments