Apple has been talking with major U.S. newspapers about adding their content to the Texture magazine app that Apple purchased in March, reports Recode.

Eddy Cue and other Apple executives have spoken with the New York Times, the Wall Street Journal, and the Washington Post about joining the Texture service. 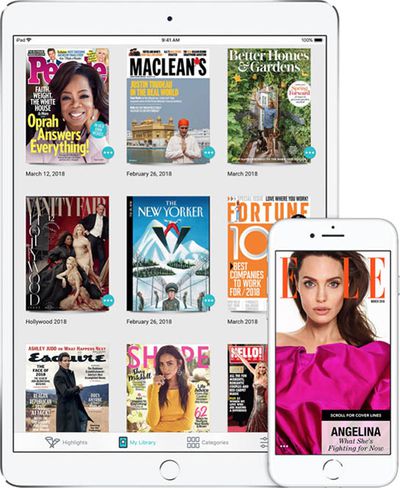 All of these newspapers limit the number of stories people can read without a paid subscription. The Washington Post, for example, charges $10 a month for access, while The New York Times costs $15 per month and The Wall Street Journal costs $37 per month.

Apple's Texture app provides access to more than 200 popular magazines like People, The New Yorker, Time, National Geographic, Shape, Newsweek, and more, all for a $9.99 per month fee.

According to Recode, it's not yet clear if Apple is aiming to add stories from the newspapers to the same $9.99 subscription service or offer the content as a paid add-on, and it's not known if the news sites are interested.

Newspapers likely won't make as much through Texture as they do through their own subscriptions and may not want to be part of a bundled service. It is possible, however, that the news providers will opt in to Texture given Apple's active install base of more than 1.3 billion devices.

An additional worry for the papers, says one executive familiar with the conversations, is that being part of a bundle of publications is less attractive than a one-to-one relationship with subscribers. It also leaves open the possibility that Apple could drop them from the bundle down the road.

Rumors have previously suggested that Apple is aiming to create an all-in-one subscription service that would offer access to digital magazines and news, Apple Music, and original television content, and adding newspaper content to Texture could be the first step towards that goal.

Pay for content from NY and Hollywood? Lol no not ever lol. I pay for adblockers to BLOCK "mainstream" content.

If this is anything like iBooks, the competition has nothing to worry about.

What’s the competition? Is there another “all you can eat for a fixed monthly fee” periodical service?
Score: 8 Votes (Like | Disagree)

BWhaler
This is a great idea. I’d love to pay one fee, even more than 10 bucks.

What I want is consistent, great design and interactions. Too many of these apps for contents are terrible experiences. Plus, they sell your information. I’d love Apple privacy.

Normally, in the past, I knew Apple would nail the design. But alas, this is Tim Cook’s apple. But I’m hopeful.
Score: 4 Votes (Like | Disagree)

Pay for content from NY and Hollywood? Lol no not ever lol. I pay for adblockers to BLOCK "mainstream" content.

Mac Fly (film)
Apple News is in the US, UK and Oz. So that 1.3 billion devices isn’t the best metric at this point. But the service will expand.
Score: 3 Votes (Like | Disagree)
Read All Comments