Apple is developing a new drama series that's based on the early life and career of NBA star Kevin Durant, who plays for the Golden State Warriors, reports Variety.

The show, called "Swagger," was inspired by Durant's experiences as a youth playing basketball. It will highlight the world of Amateur Athletic Union (AAU) basketball, taking a look into the lives of players, their families, and coaches. 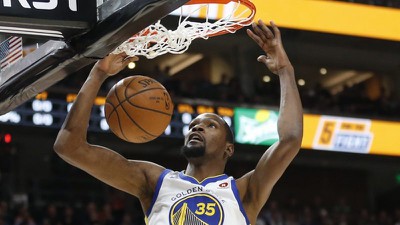 Imagine Television, led by Brian Grazer and Ron Howard, will produce alongside Kevin Durant's Thirty Five Media. Both Durant and Grazer will serve as executive producers, while Reggie Rock Bythewood will write and direct. Bythewood is known for his work on "Notorious," a movie that shared the story of Notorious B.I.G., and television series "Shots Fired."

More details about each of Apple's television projects can be found in the original content section of our Apple TV roundup.

turbineseaplane
Apple...Please stop this stuff.
Focus on what you're actually good at.
Score: 18 Votes (Like | Disagree)

William Gates
This is an Eddie Cue vanity project, isn't it? Would Durant be getting this show if he weren't on the Warriors?
Score: 16 Votes (Like | Disagree)

nburwell
Maybe it's just me, but the rumors thus far of shows that Apple is working on just don't seem that interesting. Apple certainly has their work cut out for them to try and pull my attention away from Netflix and Amazon Prime original programming.
Score: 15 Votes (Like | Disagree)

Apple...Please stop this stuff.
Focus on what you're actually good at.

adamjackson
There isn't a single TV show deal I've cared about that is potentially coming to Apple Music...and as a fanboy, this puts me in a really awkward position. I've owned, used, sold or at least experienced everything Apple has made since 1999. Every product I've touched and used a bit from every iPhone, Laptop desktop and even iPod Socks, Mighty Mouse and the shirts, mouse pads and coffee cups they sell in Cupertino.

Heck, I even was a MobileMe and itools subscriber.....with this new service, traditionally I'd watch everything Apple produced because I love Apple.

I'm in a tough situation. I basically have to accept that Apple is now doing things that have zero appeal to me and I have to emotionally check out from that. I know new Apple customers don't have that same experience but anyone that's been around long enough to go to 5+ years of Macworld, join a Mac User Group or camp out for Mac OS releases knows that it's a weird feeling when you're no longer the target demographic. Apple the media company and I are going to be in a strained relationship because they're not making things for me and I need to be okay with that.
Score: 13 Votes (Like | Disagree)
Read All Comments