Apple has picked up a new TV show called "Little America," a half-hour anthology series written by Kumail Nanjiani and Emily V. Gordon, the duo behind popular movie "The Big Sick," and Lee Eisenberg, who produced comedy series "SMILF" and will serve as showrunner.

According to Deadline, "Little America" is based on a series of true stories featured in Epic Magazine that paint a portrait of America's immigrants. From the magazine description: 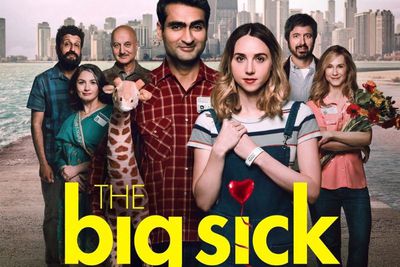 Everyone here came from somewhere else. Even Native Americans crossed the Bering Strait at some point. This is the basic American idea -- an identity open to all -- but it can be easy to forget from inside. And that's when politics can turn ugly, as it has recently, with our political narrative becoming a story of blame and fear. "Little America" is meant to counter that narrative with a fuller portrait of our most recent arrivals. Here we present just a few stories.

You'll meet a woman who kissed a car for 50 hours. A man who escaped communism via zip-line. A Hindu Mayor of a small Kansas town. These stories are a small, collective portrait of America's immigrants. And thereby a portrait of America itself.

The show will reportedly look at "the funny, romantic, heartfelt, inspiring, and unexpected lives of immigrants in America." Nanjiani and Gordon will executive produce, alongside Alan Yang, "Master of None" co-creator, and Eisenberg.

"The Big Sick," written by Nanjiani and Gordon, won multiple award nominations and was the highest-grossing indie movie of 2017. Nanjiani is also known for his work on "Silicon Valley."

"Little America," alongside Apple's "Are You Sleeping" drama starring Octavia Spencer, are two projects that are being developed for straight-to-series consideration.

Apple now has at least nine television shows in the works, and details about each one can be found in the original content section of our Apple TV roundup.

Update: Apple has officially ordered "Little America" to series according to Variety.

With all these TV shows in the works I think Apple could be working to offer a TV subscription service.

TV and Movies probably - they likely intend to compete with Netflix.

Very few of the shows they are working on sound interesting to me - and this isn't one of them.
Score: 8 Votes (Like | Disagree)

thisisnotmyname
Cynicism of the forums aside, this sounds like it could be an interesting concept. The Big Sick was a cute film and I like him on Silicon Valley.

Also Lee may be better known as a writer on The Office and Hello Ladies. Also Bad Teacher (which he may want us to forget).
Score: 3 Votes (Like | Disagree)

Dave245
With all these TV shows in the works I think Apple could be working to offer a TV subscription service.
Score: 2 Votes (Like | Disagree)

falainber
The more shows the better. But I start questioning the rational for all the companies entering this business. I am not sure there is enough ad or device sales money to sustain all this production.
Score: 1 Votes (Like | Disagree)

It was always going to be this way. Once everyone gets their differing services up and running, we're going to see the wheat separate from the chaff. Then we'll start to see the consolidation. After that we'll be right back a few major players. That a-la-carte dream some had isn't and never was going to materialize.

Kinda like how people always wanted to separate plans from phones and hated contracts. The phone companies did just that, then raised prices on the plans, removed subsidies, and equivalent plans today are at least $25 more per line than in the past. Oh and now they offer “deals” over 30 months, so there’s always a 2.5 year contract option.
Score: 1 Votes (Like | Disagree)
Read All Comments