Apple has been snapping up multiple TV shows in recent months, and its newest straight-to-series order is for a drama called "See," which was written by "Peaky Blinders" creator Steven Knight and will be directed by Francis Lawrence, known for his work on "The Hunger Games: Catching Fire" and "Mockingjay."

According to Deadline, the show is an epic world-building drama set in the future. 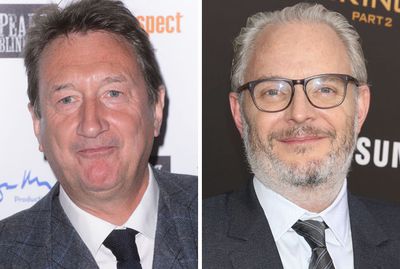 Francis Lawrence and Steven Knight, via Deadline
Little additional information is available on the series at this time, but it comes from Peter Chernin's Chernin Entertainment and Endeavor Content, which are also behind "Are You Sleeping" another upcoming Apple TV show.

"See" joins several other scripted TV shows that Apple has in the works, including a revival of 1985 Steven Spielberg sci-fi series "Amazing Stories," an untitled space drama developed by Ronald D. Moore, known for "Battlestar Galactica," an untitled "morning show drama" starring Reese Witherspoon and Jennifer Aniston, and "Are You Sleeping," a psychological thriller starring Octavia Spencer that focuses on a podcast that reopens a murder case.

Apple has also inked a deal for a docuseries called "Home," which will offer a never-before-seen look inside some of the world's most extra ordinary houses.

Apple has been aggressively pursuing original content since June of 2017, which is when it hired former Sony executives Zack Van Amburg and Jamie Erlicht to form a new video unit. Van Amburg and Erlicht, who produced shows like "Breaking Bad," "The Crown," and "Better Call Saul," are running Apple's video programming efforts on a worldwide scale under iTunes chief Eddy Cue.

It's not yet clear when the first of Apple's original TV shows will premiere, but it's possible at least one series will debut later in 2018.

KazKam
I'd really wish Apple would spin-off a new company, say, Apple Studios or Apple Media Group or something, that would be a new shell for all their original media endeavors and the Apple Music service.

I feel like all these entertainment-related services are really diluting Apple's focus as a stellar hardware and software developer. Apple's starting to feel convoluted and schizophrenic.

I want Apple proper to get their act together and focus like a laser beam on getting their foundation hardware and services squared away. Too many distractions. :/

This new media side of Apple is also the stuff that tarnishes Apple a bit in my eyes. I've always considered the entertainment biz a bit shady/dirty. Partly why I feel Iovine and all these studio exec types are a bad representatives for Apple. They bring with them all the negative big-business baggage of the entertainment industry.
Score: 22 Votes (Like | Disagree)

MH01
Was a time I said stick to computers , now stick to iPhones and get them right. They are chasing TV shows while they cannot get Apple Music right .
Score: 12 Votes (Like | Disagree)

But that's just a guess. :p

I see your point... but you have to remember that Apple is a GIANT corporation with many smaller divisions inside.

The hardware people don't even know who the media people are.

I understand. But I'm more talking about public perception and their brand. Also, I really want MacRumors to be about hardware and software again. I'm generally sick of coming to MacRumors and other Apple sites and being bombarded with stories about rappers, studio execs, TV shows, exclusive music deals, and celebs. Couldn't give two ****s.
Score: 11 Votes (Like | Disagree)

I'd really wish Apple would spin-off a new company, say, Apple Studios or Apple Media Group or something, that would be a new shell for all their original media endeavors and the Apple Music service.

I feel like all these entertainment-related services are really diluting Apple's focus as a stellar hardware and software developer. Apple's starting to feel convoluted and schizophrenic.

I want Apple proper to get their act together and focus like a laser beam on getting their foundation hardware and services squared away. Too many distractions. :/

But that's just a guess. :p

I see your point... but you have to remember that Apple is a GIANT corporation with many smaller divisions inside.

The hardware people don't even know who the media people are.
Score: 9 Votes (Like | Disagree)

Delgibbons
Look forward to watching this!

BornAgainMac
My Mac Mini is really getting old. I wish I could replace it today.
Score: 6 Votes (Like | Disagree)
Read All Comments