Apple today released iOS 11.2.2, the ninth official update to the iOS 11 operating system. iOS 11.2.2 comes almost one month after the release of iOS 11.2.1, another minor update, and a month after iOS 11.2, which brought brought Apple Pay Cash, faster 7.5W wireless charging, and a long list of bug fixes.

The iOS 11.2.2 update can be downloaded for free on all eligible devices over-the-air in the Settings app. To access the update, go to Settings --> General --> Software Update. 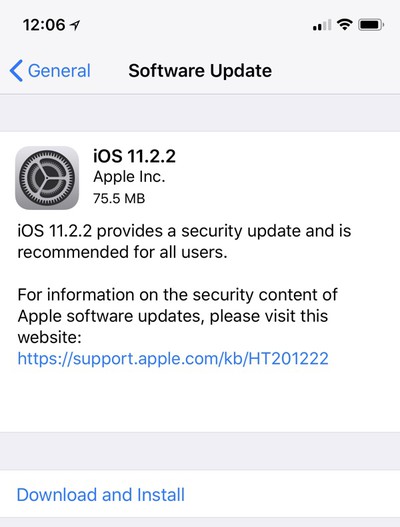 The iOS 11.2.2 includes further fixes for the "Meltdown" and "Spectre" vulnerabilities that came to light last week. Meltdown and Spectre are serious hardware-based vulnerabilities that take advantage of the speculative execution mechanism of a CPU, allowing hackers to gain access to sensitive information.

While Meltdown was addressed in the iOS 11.2 update, Apple said it would introduce a mitigation for Spectre early this week. There is no hardware fix for Spectre, so Apple is addressing the vulnerability using Safari-based software workarounds. From Apple's security support document:

Available for: iPhone 5s and later, iPad Air and later, and iPod touch 6th generation
Description: iOS 11.2.2 includes security improvements to Safari and WebKit to mitigate the effects of Spectre (CVE-2017-5753 and CVE-2017-5715).

For more on iOS 11 and its updates, make sure to check out our iOS 11 roundup.

zorinlynx
What about devices left behind on iOS 10 like the iPhone 5 and 5C? Are they going to remain insecure?
Score: 26 Votes (Like | Disagree)

ediks
Hope it doesnt throttle down my 8
Score: 23 Votes (Like | Disagree)

If that counts for anything

It’s worth noting that Apple won’t let you download an iOS update as small as 66 MB using cellular data despite allowing much larger app downloads. And, well, you can stream video online until you’re blue in the face.

This is kind of dumb.

This behavior still drives me nuts. Some people don't have access to Wi-Fi all the time.

If Apple wants to display a scary warning before you download a cellular update OTA, that's fine. But if I can send hundreds of MBs over the air to sync my Photos Library or stream videos all day long, I should be able to install a security update without having to wait hours or days to connect to decent Wi-Fi or risk using some questionable public hotspot to (ironically) download a security update.

simonmet
It’s worth noting that Apple won’t let you download an iOS update as small as 66 MB using cellular data despite allowing much larger app downloads. And, well, you can stream video online until you’re blue in the face.

As important as this is, definitely going to wait on reviews on this one. You be the testers for me, guys.

I'll let the beta tester go first with this one.

This is literally just a security update for Spectre. Don’t be so dramatic.
Score: 12 Votes (Like | Disagree)
Read All Comments

Monday May 17, 2021 6:06 am PDT by Joe Rossignol
Apple today announced that Apple Music will be gaining support for Spatial Audio with Dolby Atmos at no additional cost starting in June. At launch, Apple Music subscribers will have access to thousands of songs in Spatial Audio from artists like J Balvin, Gustavo Dudamel, Ariana Grande, Maroon 5, Kacey Musgraves, The Weeknd, and many others. Apple says this feature will provide a...
Read Full Article • 439 comments