Apple today released iOS 11.2, the second major update to the iOS 11 operating system available on the iPhone, iPad, and iPod touch. iOS 11.2 comes a month after iOS 11.1, the first major update to iOS 11, and it follows several other smaller bug fix updates. 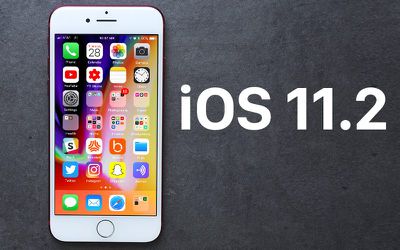 You can quickly and easily send and receive money through iMessage conversations with Apple Pay Cash. Cash is sent from a linked debit or credit card, while received cash is stored in an Apple Pay Cash card in the Wallet app and can be used for purchases or transferred to a bank account. For more on Apple Pay Cash, check out our how to.

When it comes to the iPhone X interface, iOS 11.2 adds a small bar underneath the status bar icons located at the upper right side of the Lock screen, which is designed to make the location of the Control Center gesture more clear. On the iPhone X, Control Center is accessed by swiping down from the top of the device.

In Control Center on all devices, there are two new informational pop-ups that are displayed when using the Wi-Fi or Bluetooth toggles. These pop-ups explain that Bluetooth and Wi-Fi are disabled temporarily rather than permanently when accessed from the Control Center.

iOS 11.2 introduces a new Sports section in the dedicated TV app, which offers up access to live sports games through integration with the ESPN app. The Sports app can be accessed through a new "Sports" tab at the bottom of the app, and it offers up custom content based on team preferences and current sports seasons.

There are multiple bug fixes in the update, including a fix for an animation bug in the Calculator app that caused some numbers and symbols to be ignored when entered in rapid succession. The update removes the animations from the calculator app so calculations can be done quickly with no need to pause between entering numbers to obtain the correct result.

The update also addresses a date bug that caused continual crashing in iOS 11.1.2 after December 2. The problem was linked to local notifications, and according to a support document, it is fixed in iOS 11.2. iPhone and iPad users experiencing this bug should turn off notifications and then install iOS 11.2.

Other new features in iOS 11.2 include redesigned camera emojis and other emoji tweaks, a new loading animation for Live Photos effects, and Live wallpapers for the iPhone X. For developers, the update introduces a new feature that allows them to offer new customers discounted introductory pricing for auto-renewable subscriptions in the App Store. Full release notes for the update are available below:

Apple Pay Cash (US Only)
Send, request, and receive money from friends and family with Apple Pay in Messages or by asking Siri

For more details on the iOS 11 operating system, make sure to check out our dedicated roundup.

Update: We're seeing several reports that Apple Pay Cash is not available in the release version of iOS 11.2. Given that this update was released at an unusual time, it may not be activated as of yet. It's likely we'll see Apple Pay Cash become available early next week.

It's unlike me to say this, but we are in unusual territory- I think we are past the yelling stage. Someone needs to be fired at this point. I hope it's not Craig Federighi, even though it probably is. It is his department after all. But some very drastic steps need to be taken and ASAP.

Why do people always rush to call for someone’s dismissal the instance something goes wrong?

Software is a process, not an end goal. There will always be bugs that need quashing, especially when iOS is constantly evolving and being iterated on. If a software engineer is sacked every time there is a bug, we won’t have anyone left to work before long.

Just step back, take a deep breath, and let Apple do their thing.
Score: 25 Votes (Like | Disagree)

Eliottjames
What a weird release time! Maybe they're rushing it out because of the time bug...
Score: 24 Votes (Like | Disagree)

QCassidy352
If you need a pop up notification to explain what a toggle does, then your UI team has really failed.
Score: 20 Votes (Like | Disagree)

FoxMcCloud
All I care about is iMessage in iCloud. When does that arrive?
Score: 19 Votes (Like | Disagree)

Why do people always rush to call for someone’s dismissal the instance something goes wrong?

Software is a process, not an end goal. There will always be bugs that need quashing, especially when iOS is constantly evolving and being iterated on. If a software engineer is sacked every time there is a bug, we won’t have anyone left to work before long.

Just step back, take a deep breath, and let Apple do their thing.

Because this is not about one individual issue. It's about a trend. We have seen that the overall quality of iOS has been going down over the past 3 years. We have seen the introduction of Showstopper bugs making it into production with customers, that have never taken place before.

Let's just look at the past few weeks shall we:

1) Mac OS bug that allows for Root access to the system because a bug sets the Root Password to blank.

2) In the 11.2 beta releases for Beta 3 and Beta 4 and Beta 5 (at least, we did not have Beta 6 long enough to know- and it's production now) We saw a bug that could in it's worst form prevent your iPhone from being a phone. At the least it would break your voicemail.