Reports of delays to Apple's upcoming iPhone line-up continued this week, with the Chinese-language Economic Daily News claiming on Monday that production of the so-called "iPhone 8" will not start until between November and December, with production of the more typical "S" cycle upgrades to the iPhone 7 and 7 Plus also potentially facing delays.

According to the report, the flagship redesigned OLED iPhone will ship only in small volumes this year, because yield rates at the main manufacturing plants have still not reached the mass production stage. 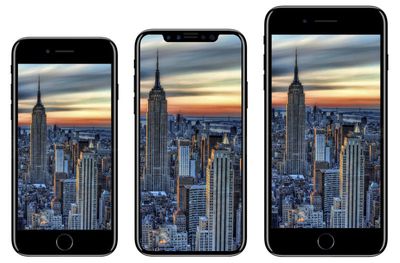 While there were previous reports indicating that volume production for new iPhone devices has commenced, yield rates at the two main ODMs, Foxconn Electronics and Pegatron, have not yet reached levels that warrant mass production, the report said.

Reports of iPhone delays typically happen every year and don't tend to pan out, but on balance we seem to be seeing more than usual this time around, apparently spurred by claims that Apple has found its redesigned handset particularly challenging to finalize, whether that's because of the intricacies of the customized OLED panel and other key components leading to low or staggered supplies, or problems integrating the Touch ID fingerprint sensor.

KGI Securities analyst Ming-Chi Kuo recently published a report supporting claims that Apple will debut the OLED iPhone in September, but the device will face "severe supply shortages" for some time. Kuo believes that production ramp-up on the OLED iPhone model won't begin until as late as October-November, two months later than previous ramp-ups in August-September. Similar rumors have been circulated by Bloomberg, analysts from Barclays, and Brian White. Today's report is the most delayed 2017 timeframe for "iPhone 8" production we've seen so far.

Last week claims were also made that the software-side of things isn't going well for Apple either, with rumors that problems with the front-facing camera's 3D sensor could see the feature temporarily unavailable at launch. A purported wireless charging accessory for the iPhone is also thought to be coming later than originally planned.

As for the 4.7-inch and 5.5-inch LCD iPhones that Apple is said to be launching alongside the OLED iPhone, volume production is now said to be entering "full swing" in August, which is one to two months later than the normal mass production schedule for Apple's iPhones.

Sunny1990
Every year we hear this same report and Every year iPhone has been released at it's normal Date. This Report has never been true till date :-(
Score: 31 Votes (Like | Disagree)

recoil80
It wouldn't be July without a report claiming production delays
Score: 12 Votes (Like | Disagree)

NoNothing
I can see the internet in my minds eye come October: "sure the iPhone Pro is sold out, they are only making 1000 per month. It's typical Apple to limit supply to create headlines of sold out for months."
Score: 11 Votes (Like | Disagree)

dan9700
Omg all these dam iphone rumours has actually made me not care about it anymore so much hype for something no one knows about
Score: 8 Votes (Like | Disagree)

What happened to Tim Cook being the 'supply chain God'?

You haven't been praying to him
Score: 6 Votes (Like | Disagree)
Read All Comments

Sunday January 23, 2022 2:59 am PST by Tim Hardwick
Apple has always emphasized the depth of thought that goes into the design of its products. In the foreword to Designed by Apple in California, a photo book released by the company in 2016, Jony Ive explains how Apple strives "to define objects that appear effortless" and "so simple, coherent and inevitable that there could be no rational alternative." But every once in a while even Apple...
Read Full Article • 381 comments

Sunday January 23, 2022 10:32 am PST by Juli Clover
Apple is working on a number of new products that are set to launch this fall, and Bloomberg's Mark Gurman says that it will be "the widest array" of new devices that Apple has introduced in its history. In his latest "Power On" newsletter, Gurman explains that Apple is working on four new iPhones (5G iPhone SE, iPhone 14, iPhone 14 Pro, and iPhone 14 Pro Max), an updated low-end MacBook Pro,...
Read Full Article • 210 comments

Friday January 21, 2022 12:43 pm PST by Juli Clover
Earlier this week, Apple began requiring that customers taking advantage of educational discounts in the United States verify their status as a teacher, student, or school staff member through UNiDAYS. The requirement was a major change as Apple had never asked customers to go through a verification process in the United States before, and now, just three days after verification was added,...
Read Full Article • 222 comments