As the prospective September launch date of the iPhone 8 fast approaches, designers and engineers at Apple are said to be working "feverishly" to fix software problems in the device that could lead to production delays, reports Fast Company.

Citing a source "knowledge of the situation," the site says there's a "sense of panic" in the air because should the problems not be resolved, the device might ship without major features enabled. 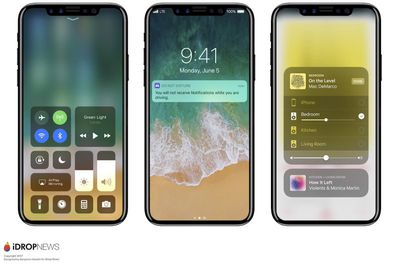 iPhone 8 renders from iDrop News
While Gruber didn't offer an explanation, Fast Company says software issues, not components, are the problem. If the software isn't ready, wireless charging could be unavailable when the phone first begins shipping.

Apple is also said to be struggling with the 3D sensor expected to be built into the front-facing camera, which is rumored to enable a facial scanning system that could replace Touch ID.

Without confirming that's what the front-facing 3D sensor is for, my source says Apple has been struggling to get the sensor to work reliably. Again, the sensor hardware is not the problem, but rather the accompanying software.

The source believes Apple will likely have the 3D software working in time. But if not, the company could include the sensor in the phone anyway, and turn it on later on with a software update.

On the subject of Touch ID, Fast Company's source believes Apple could still be working to add it under the display. Yesterday, a report from KeyBanc Capital Markets suggested Apple was continuing to struggle to put the fingerprint sensor under the glass of the device, and that the company had "just a couple of weeks" to solve the problem.

Though this sounds unlikely because new device designs are often finalized months ahead of production, Fast Company's source calls the report "plausible" and says "in all likelihood, the fingerprint sensor will be embedded under the display." The source also says iPhone features "can remain fluid until deep in the summer" ahead of an iPhone launch.

With multiple reputable sources (Bloomberg and KGI Securities analyst Ming-Chi Kuo) reporting Apple has adopted a superior facial recognition system to replace Touch ID, it's not clear how accurate Fast Company's information is, but given the number of conflicting rumors we've heard over the course of the iPhone 8's development, it's still difficult to predict exactly what we're going to see when the device debuts in September.

We've previously heard of problems with the display, the 3D sensor, and Touch ID, all of which have led to multiple rumors pointing towards serious supply issues. The iPhone 8, which will be sold alongside an "iPhone 7s" and an "iPhone 7s Plus," may not be widely available until late in 2017 or early in 2018 due to a later production ramp-up schedule, according to the latest rumor.

kemal
It would seem the iTunes team has been working on the phone.
Score: 52 Votes (Like | Disagree)

btrach144
I think this is fake news released by Apple. It creates a sense of awe when they announce the phone and all of the features are enabled.
Score: 41 Votes (Like | Disagree)

I think this is fake news released by Apple. It creates a sense of awe when they announce the phone and all of the features are enabled.

They don't need to because "journalists" do it for them.
Score: 35 Votes (Like | Disagree)

fast company previously reported:
- "Some media reports have suggested that Apple will include a set of Lightning-connected EarPod earphones in the box with the iPhone 7. It’s more likely, our source says, that Apple will sell a more expensive pair of noise-canceling,"
- "iPhone 7...will be noticeably thinner, will very likely support wireless charging and be waterproof, a source with knowledge of the company’s plans tells Fast Company."

ArtOfWarfare
Unless Apple is planning on doing some real wireless charging (IE, receives a charge even when it's several feet from the power source), I find this story hard to believe.

Besides the competing phones that have been doing this for nearly a decade, Apple's own Apple Watch has been able to do "wireless charging" for over 2 years now.
Score: 28 Votes (Like | Disagree)
Read All Comments