'iPhone 8' Still Expected to Launch in September in Limited Quantities

Apple's widely rumored high-end iPhone with a 5.8-inch edge-to-edge OLED display will launch in September, although the majority of stock may not be available until later in the fourth quarter, according to the latest research from Barclays analysts Blayne Curtis, Christopher Hemmelgarn, Thomas O'Malley, and Jerry Zhang. 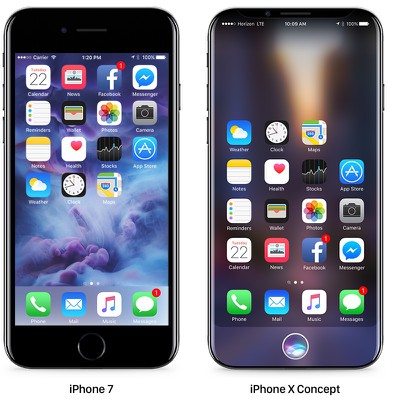 "iPhone X" concept by designer Gabor Balogh
The prediction suggests that Apple's tenth-anniversary iPhone, which has been variously dubbed the iPhone 8, iPhone X, iPhone Pro, or iPhone Edition, will still be available in limited quantities in September. However, shipping estimates could slip to several weeks out just minutes after pre-orders begin.

What do you think Apple's rumored "special edition" iPhone will be called? Tweet us your own ideas. — MacRumors.com (@MacRumors) March 18, 2017

An excerpt from the Barclays research note obtained by MacRumors:

Suppliers generally had good things to say about the upcoming iPhone 8 launch (for our purposes iPhone 7s, iPhone 7s Plus, and iPhone Pro) as new features drive a more complicated manufacturing process and higher ASPs. We now believe that all three devices will feature wireless charging and will all be launched in the normal September timeframe, although the majority of iPhone Pro volumes may not be available until Q4.

Barclays contradicts a recent report that claimed the 5.8-inch iPhone will be announced alongside updated 4.7-inch and 5.5-inch models, or the so-called iPhone 7s and iPhone 7s Plus, but might not go on sale until much later.

By the sounds of it, availability of Apple's first iPhone with an OLED display could be similar to the iPhone 7 Plus in Jet Black, which was virtually nowhere to be found through the holiday shopping season last year. When an Apple Store or reseller happened to get a few Jet Black models in stock, they sold out almost instantly.

The analysts, citing information from Apple's supply chain following a trip to Asia earlier this month, also reiterated their expectations for the 5.8-inch iPhone. Many of its predictions echo those already made by KGI Securities analyst Ming-Chi Kuo, who has a respectable track record at revealing Apple's plans.

Barclays said the phone will feature a 5.8-inch display with 5.15 inches of usable screen, as Kuo said. It expects Touch ID to be embedded in the display, and the remaining space could be for virtual buttons. It believes the device will have wireless charging, but wireless charging accessories will be sold separately.

It said the 5.8-inch iPhone's stacked logic board design will provide more space for a larger battery and other components, as Kuo previously said. Other features Barclays expects include a front-facing 3D sensor module, the same dual camera setup as the iPhone 7 Plus, and a film-based Force Touch solution.

macslayer118
Every year. This article is the same every year.
Score: 33 Votes (Like | Disagree)

Apple does this build hype every year. Make a few to make you want it more.

And people say this every year, that Apple hold off on stock to artificially inflate demand. It's ridiculous. The truth is much simpler; they're very desirable phones and Apple can't make them quick enough.
Score: 18 Votes (Like | Disagree)

dominiongamma
Apple does this build hype every year. Make a few to make you want it more.
Score: 13 Votes (Like | Disagree)

That logic just completely baffles me. While the the manufacturers very well might not be able to crank them out quick enough, if Apple really wanted to solve this problem, they could. Supplies have been "constrained" for 10 years now.

Apple sold 10 million iPhone 6 devices in the first weekend. Even more for the 6S.

Just go on sales for the first 6 months and the shipping numbers would show you that they'll have to crank about 800,000 phones out a day. That's an awful lot. If you're talking about logic, do the maths and you'll see it's pretty obvious.

avanpelt
Tim 'supply chain expert' Cook strikes again! I'll go ahead and give him the benefit of the doubt that perhaps the "iPhone 8" is so revolutionary that only very few manufacturers can produce it to Apple's exacting standards, thus lowering the amount of product that can be produced.

Well, it's either that or they're purposely doing this to inflate the demand. Not sure which.
Score: 10 Votes (Like | Disagree)
Read All Comments

Friday July 10, 2020 11:12 am PDT by Juli Clover
Apple this month published a support document that warns customers against closing their Mac notebooks with a cover over the camera as it can lead to display damage. Image via Reddit Apple says that the clearance between the display and the keyboard is designed to very tight tolerances, which can be problematic. Covering the camera can also cause issues with automatic brightness and True Tone....
Read Full Article • 311 comments

Friday July 10, 2020 7:24 am PDT by Eric Slivka
Apple and Foxconn have reached a key milestone in the development of Apple's long-rumored augmented reality headset, with the semitransparent lenses for the device moving from prototype to trial production, reports The Information. Apple is developing the lenses on a single production line at a Foxconn factory in Chengdu in southwestern China, where most of Apple’s iPad production is...
Read Full Article • 78 comments

Friday July 10, 2020 2:58 am PDT by Tim Hardwick
At last month's WWDC, Apple officially announced that its Mac computers will be transitioned from Intel x86 to homegrown Apple Silicon chips. Apple said it plans to deliver the first Apple Silicon Mac by the end of the year and complete the transition in about two years. According to Apple analyst Ming-Chi Kuo, a 13.3-inch MacBook Pro with a form factor similar to the current 13.3-inch...
Read Full Article • 176 comments