Bloomberg today has published a detailed report about what it expects from the tentatively named iPhone 8. 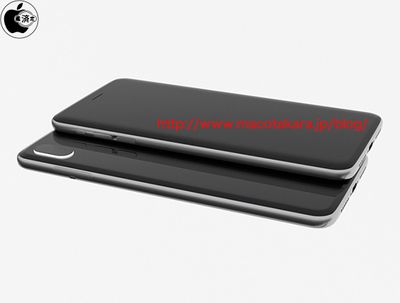 "iPhone Edition" render by Japanese blog Mac Otakara
The report, citing people familiar with the matter, claims Apple's latest prototype features a stainless steel frame sandwiched between symmetrical glass on the front and the back. That design, one of several that Apple has tested, would be similar conceptually to the iPhone 4 launched in 2010.

The overhauled iPhone will also adopt an OLED display that covers almost the entire front of the device, according to the report. The display itself will be flat, while the cover glass curves into the stainless steel frame along the edges. The cover glass will have similar 2.5D curvature as the iPhone 7.

The report backs rumors of Apple testing at least one high-end iPhone prototype with a rear dual-lens camera positioned vertically, instead of horizontally like on iPhone 7 Plus. Apple is also said to be testing dual lenses for a revamped front camera, compared to a single lens on current iPhones.

Apple has experimented with integrating the iPhone's fingerprint scanner into the screen, as previously known. The report said it's a technical challenge, so it's unclear if the feature will make it into the final product. Earlier research said Apple is facing yield issues with the under-display solution.

Apple also tested a prototype with a glass back that had more dramatic curves on the top and bottom like the original iPhone from 2007, perhaps alluding to a previous water drop design rumor, but the report says Apple is more likely to ship the version with more subdued curves due to mass production considerations.

Bloomberg believes that supply constraints could mean the high-end iPhone isn't readily available until one or two months after Apple's typical September event, where it is also expected to announce updated 4.7-inch and 5.5-inch iPhone models. All three new iPhones will run iOS 11 and could have faster Apple A11 chips.

Today's report corroborates several "iPhone 8" design rumors that have surfaced in recent months, while the existence of multiple prototypes explains why some rumors have been conflicting so far.

I still don't know why this bothers people so much. I'd rather have the protruding camera than have the entire phone that thick just to hide it. It isn't optimal, but I've never seen it as something to be upset about.
Score: 24 Votes (Like | Disagree)

I still don't know why this bothers people so much. I'd rather have the protruding camera than have the entire phone that thick just to hide it. It isn't optimal, but I've never seen it as something to be upset about.

Put your phone on a desk and type on it. It wobbles with every touch. That bothers me.

I would rather have a not-so thin phone with a decent battery that I can lay flat and use properly.
Score: 15 Votes (Like | Disagree)

I still don't know why this bothers people so much. I'd rather have the protruding camera than have the entire phone that thick just to hide it. It isn't optimal, but I've never seen it as something to be upset about.

Should be more upset about having touch id on the back.
Score: 10 Votes (Like | Disagree)

KohPhiPhi
The iPhone 4 design has always been my favorite of all iPhone iterations. That jet black glass covering the front and back, wrapped around by the flat metal rim was slick A.F.
Score: 9 Votes (Like | Disagree)

Put your phone on a desk and type on it. It wobbles with every touch. That bothers me.

I would rather have a not-so thin phone with a decent battery that I can lay flat and use properly.

Who does that? It's not a tablet. Most normal people hold the phone in their hands and type.
Score: 9 Votes (Like | Disagree)
Read All Comments

Saturday February 4, 2023 10:05 am PST by Eric Slivka
Online retailer TigerDirect has slashed pricing on the M1 iPad Air in several colors, offering the base 64GB configuration for just $313.99 in Purple and Pink. Note: MacRumors is an affiliate partner with TigerDirect. When you click a link and make a purchase, we may receive a small payment, which helps us keep the site running. That's a savings of 48% compared to Apple's normal $599.00...
Read Full Article • 526 comments