KGI Securities analyst Ming-Chi Kuo today made ten predictions related to the 2017 debut of the "iPhone 8," "iPhone 7s," and "iPhone 7s Plus," which are expected to be announced in September and launch sometime afterwards (via StreetInsider).

Kuo's predictions today largely fall in line with all the rumors we've been hearing about the 2017 iPhones over the past few months, with a few new tidbits that suggest the iPhone 8 will be industry-leading in terms of its edge-to-edge design, come in limited color options, and that Apple may be removing Touch ID completely from the OLED smartphone. 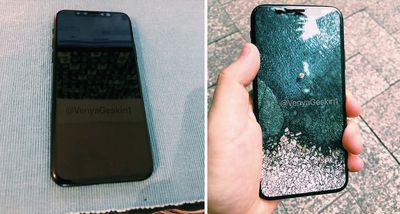 A combination of leaked iPhone 8 parts via Benjamin Geskin
According to Kuo, the iPhone 8 will have "the highest screen-to-body ratio of any smartphone currently available worldwide," thanks to a drastic reduction in bezels and an edge-to-edge display that we've recently been seeing in various renders. A "notch" for the front-facing camera and sensors will be the only noticeable part of the iPhone 8's bezel design, Kuo said.

Kuo's new predictions also continue to corroborate the iPhone 8's lack of a physical Home button, but he goes on to state that Touch ID will not be incorporated into the OLED smartphone's display. The analyst didn't provide any mention of Touch ID moving elsewhere on the iPhone 8, like the back of the device or lock button as has been previously rumored and largely debunked.

Kuo instead referenced advanced features like "3D sensing for facial recognition," suggesting Apple is ready to ditch Touch ID completely for a new form of biometric security. The analyst said that Apple is still facing technical challenges with implementing Touch ID into a full-screen front-facing display.

1: Apple will roll out three iPhone models in 2H17, including an all-new design 5.2” (or 5.8” depending on the definition of screen size in use) OLED iPhone & LCD models including 4.7” & 5.5” (front form factor design similar to current ones).

2: OLED iPhone will adopt full-screen design, with the highest screen-to-body ratio of any smartphone currently available worldwide (thanks to a notch display design); the OLED model will also come with a virtual Home button, though the button will not support fingerprint recognition.

4: OLED iPhone & 5.5” LCD iPhone will both come with DRAM capacity of 3GB (for dual-camera requirements), while 4.7” version will only use 2GB DRAM (for only single camera).

5: Three new models will all come with 64GB and 256GB storage options.

6: All three new models will have a Lightning port; however, there will be an embedded USB-C power delivery IC for higher charging efficiency.

7: The output power of the receiver & speaker of OLED iPhone will be more consistent to create better stereo effects.

8: To maintain its boutique image, we think the OLED version will offer fewer options for casing colors than LCD iPhone models.

9: We predict October-November & August-September as production ramp-up schedules of OLED iPhone & LCD iPhone, respectively. "For optimized promotional effect, we think Apple may unveil the three models simultaneously in September, though the launch date of the OLED version may trail that of LCD models, and supply tightness may not improve before 1H18."

10: We forecast shipments of the three new models in 2017F will be 80-85mn units, with an equal split between OLED & LCD versions.

Another new tidbit includes Kuo's belief that the iPhone 8 will come in fewer color options than the iPhone 7s and iPhone 7s Plus, which the analyst said will help Apple maintain the OLED iPhone's "boutique image."

Otherwise, Kuo's predictions fall in line with previous reports we've seen on the 2017 iPhones, including 64GB and 256GB storage capacities, 3GB of RAM for iPhone 8 and iPhone 7s Plus and 2GB of RAM for iPhone 7s, and a Lightning port with the addition of USB-C Power Delivery for faster charging.

Kuo still believes that all iPhones will be revealed in September, but the iPhone 8 will see a wide availability well after the LCD models thanks to a later production ramp-up schedule. In May, Kuo predicted that a "worst case scenario" is also possible, where "severe supply shortages" will persist throughout 2017 for users looking to get their hands on iPhone 8, with supply tightness not improving until the first quarter of 2018.

LXC101
I'm not ready for the disappointment of no under-screen touch ID.
Score: 65 Votes (Like | Disagree)

jameswilby
Ok then... So how would Apple Pay work on iPhone?
Score: 62 Votes (Like | Disagree)

"No touch ID" is stupid...this guy is completely wrong...has he ever been right?

That's a click-bait headline. At no time did Ming-Chi Kuo state that. He only said TouchID would not be embedded in the screen.
Score: 43 Votes (Like | Disagree)

73b
No Touch ID might actually stop me from upgrading from my 7 Plus.
Score: 39 Votes (Like | Disagree)

"No touch ID" is stupid...this guy is completely wrong...has he ever been right?

1) He said no TouchID embedded in the display, not that there would be no TouchID at all. Macrumors are the ones responsible for the misleading clickbait headline, so perhaps you should be questioning their credibility instead.

2) Ming-Chi Kuo has the highest accuracy amongst Apple analysts. He's not always right, but he's right more often than the rest.
Score: 37 Votes (Like | Disagree)
Read All Comments