Leaker Benjamin Geskin has posted a few new images and a video of what Apple's upcoming iPhone 8 might look like once it's in the hands of users later this year. Using a leaked dummy model, screen protector, and a printed picture of an iOS wallpaper, Geskin has put together the gist of what current rumors have suggested the iPhone 8 will look like once it's announced in the fall.

Geskin's images depict an iPhone 8 dummy model as we've seen previously, with a suggested 5.8-inch display area, minimal bezels, front-facing camera and sensor dip, but with an all-black frame instead of models that have previously depicted a rumored stainless steel frame. To give users a glimpse as to what the iPhone 8 display might look like when activated, Geskin then attached a picture of an iOS wallpaper to the dummy, and applied a screen protector on top. 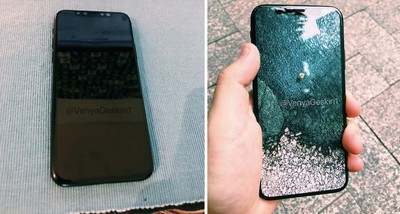 A video shared on Geskin's Twitter account has further provided a glimpse into the iPhone 8 dummy in motion.

The iPhone 8 is predicted to to be the first major iPhone redesign since the iPhone 6 in 2014, with additional features such as wireless charging and improved waterproofing to further bolster the smartphone's position as a premium device. Alongside the iPhone 8 will be the "iPhone 7s" and "iPhone 7s Plus," which are expected to keep the current iPhone 7 design while offering the usual iterative spec bumps like improved battery life and snappier performance.
[ 237 comments ]

You mean, thank you, Samsung? S6 edge came out two years ago...

What the **** does Samsung have to do with anything? Apple could have keep the iPhone bezels the same this year if they wanted to but they didn't--that's my point. Don't start that "who did it first crap."
Score: 21 Votes (Like | Disagree)

macduke
This iPhone is the sex.
Score: 19 Votes (Like | Disagree)

Sunny1990
This looks so dmn beautiful with those reduced bezels, I am eagerly waiting for this iPhone.
Score: 13 Votes (Like | Disagree)

1. Edge to edge curved display like Samsung (not a deal breaker and we need to have some sort of grip on the phone without touching the screen).

Ehh, Samsung can keep that. Not a fan of distorted content.
Score: 13 Votes (Like | Disagree)
Read All Comments

Monday June 21, 2021 7:07 am PDT by Joe Rossignol
Following widespread reports that the iPhone 12 mini has experienced poor sales performance, at least relative to other iPhone 12 models, Taiwanese research firm TrendForce today claimed that production of the device has already ended. According to TrendForce, the iPhone 12 mini "reached End-of-Life ahead of time" during the second quarter of 2021, suggesting that Apple will focus on selling ...
Read Full Article • 178 comments

Monday June 21, 2021 7:17 am PDT by Hartley Charlton
Users appear to be underwhelmed by Apple's upcoming iOS 15 and iPadOS 15 updates, according to the findings of a new survey by SellCell. The survey asked 3,000 iPhone and iPad users, evenly split between men and women, aged 18 or over in the United States, what they thought of iOS 15, iPadOS 15, and the naming of the upcoming iPhone 13 lineup. Over 50 percent of all of the survey's...
Read Full Article • 379 comments