The widely rumored 5.8-inch iPhone with an edge-to-edge OLED display will match the iPhone 7 Plus with 3GB of RAM and come in two storage options, 64GB and 256GB, according to Chinese research firm TrendForce. 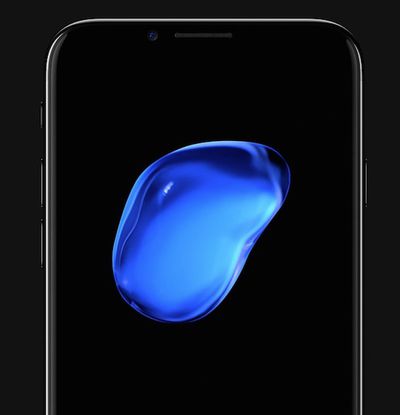 The report, which outlines several already-rumored features, added that the so-called "iPhone 8" will not have a fully curved display due to production and drop test issues with 3D glass. Instead, the high-end device will adopt the same slightly curved 2.5D cover glass used since the iPhone 6 and iPhone 6 Plus in 2014.

TrendForce said Apple will remove the Home button on the iPhone, as widely rumored, and integrate the related functions into the display. If that fact is accurate, it suggests rumored 3D facial recognition capabilities could supplement rather than fully replace Touch ID, which could be embedded into the display.

TrendForce itself expects the "iPhone 8" to incorporate 3D sensing technology that can be used for facial recognition and augmented reality features.

The research note said the 5.8-inch iPhone will be accompanied by updated 4.7-inch and 5.5-inch models with LCD displays. The 5.5-inch model will allegedly have the same 3GB of RAM as the iPhone 7 Plus, while the 4.7-inch model is said to have 2GB of RAM. Both models are expected to include up to 256GB of storage.

Rumors are generally shaping up to suggest the 5.8-inch iPhone with an OLED display will be a significant upgrade, but the model could cost upwards of $1,000 in the United States. Meanwhile, the new 4.7-inch and 5.5-inch models are expected to be iterative but less expensive upgrades to the iPhone 7 and iPhone 7 Plus.

Last year, TrendForce accurately predicted the iPhone 7 and iPhone 7 Plus would be available in 32GB, 128GB, and 256GB storage capacities.

Chupa Chupa
If it's 256 at the 128 price hooray. If it's Apple trying to put the squeeze on customers it's really shameful.
Score: 36 Votes (Like | Disagree)

Gix1k
Classic Apple! Force people to buy 256gb and get as much money back right away from people! $949+ for this device.
Score: 14 Votes (Like | Disagree)

I have a 7 plus and 3gb of ram is nice, but I often find myself switching to a laptop because my phone can't handle certain websites. I think 4gb of ram would've been better, most phones have it.

Most phones runs Android. iOS is more efficiënt with RAM. What adult websites are you trying to load?
Score: 14 Votes (Like | Disagree)

dannyyankou
I have a 7 plus and 3gb of ram is nice, but I often find myself switching to a laptop because my phone can't handle certain websites. I think 4gb of ram would've been better, most phones have it.
Score: 11 Votes (Like | Disagree)

Nik
I am wondering how cases will sufficiently attach if the display is edge-to-edge. Even more broken screens incoming.
Score: 10 Votes (Like | Disagree)

profets
There's so much smoke when it comes to the rumours for this iPhone '8' that I'm really starting to wonder what the fire will look like. Should be quite interesting.
Score: 9 Votes (Like | Disagree)
Read All Comments

Friday January 21, 2022 6:11 am PST by Hartley Charlton
Following months of bleak news about Peloton's "precarious state," including the revelation that it has halted production of its bikes and treadmills, Apple is being floated as a potential buyer of Peloton's troubled fitness business. Yesterday, CNBC reported that Peloton will temporarily stop production of its connected fitness products due to a "significant reduction" in consumer demand, a ...
Read Full Article • 314 comments