For the fourth year in a row, Apple CEO Tim Cook is participating in a charity auction through CharityBuzz, offering whoever bids the most the chance to eat lunch with him at Apple's headquarters in Cupertino. As with last year's auction, Cook is also offering tickets to an unspecified Apple keynote event.

Two people will be able to attend the lunch meeting with Cook, with the experience set to last for approximately one hour. Lunch is included in the price of the auction, but travel and accommodations are not. The offer expires on May 5, 2017, and will be scheduled at a "mutually agreed upon date." 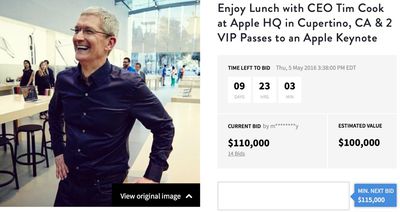 The auction, which will last until May 5, has an estimated value of $100,000, but bids have already reached $110,000. All proceeds from the auction will be donated to the Robert F. Kennedy Center for Justice and Human rights, a charity that aims to achieve a "just and peaceful world by partnering with human rights leaders, teaching social justice and advancing corporate responsibility." Tim Cook has supported the RFK Center for several years running and was recently elected to the board of directors.

Hey that's great. Lunch with a powerful CEO that only the mega Rich can afford. Awesome. Good plan.

It's for charity. There's really no need for snarkiness.

If I had tons of money, I'd totally be interested. The money will be going to a good cause, and it'd be an interesting lunch!
Score: 20 Votes (Like | Disagree)

twocents
Love to imagine the conversation I'd have.
"So I love your products and all, but why is there still 16GB base models for premium products at premium pricing in 2016?"
Score: 16 Votes (Like | Disagree)

MaulRx
I'll wait for the lunch S next year.
Score: 13 Votes (Like | Disagree)

Why the rapidly declining yield?

Nothing really groundbreaking has come out of Apple since 2010. People see that, realize that that was about when Tim took over full time, and conclude that Apple's success since 2010 was nothing but momentum.
Score: 9 Votes (Like | Disagree)

WRX-SRQ
Hey that's great. Lunch with a powerful CEO that only the mega Rich can afford. Awesome. Good plan.
Score: 9 Votes (Like | Disagree)
Read All Comments