Tim Cook's third annual CharityBuzz auction ended this afternoon, earning $200,000 for the Robert F. Kennedy Center for Justice and Human Rights. The auction, which had more than 20 bids, includes a one hour lunch date with Tim Cook at Apple's headquarters in Cupertino and two VIP passes to an Apple keynote event to watch Apple unveil new products. 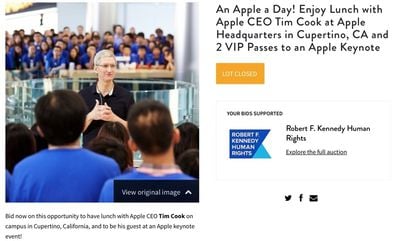 Today's auction winner will be able to bring one additional person to have lunch with Cook, with the cost of lunch being included in the auction price. Transportation and accommodations to Cupertino are not included, however, and the exact date of the lunch will be scheduled at a mutually agreed upon time.

This year's event, like last year's, included two VIP tickets to an upcoming Apple keynote event -- WWDC is on the horizon, so the auction winner may be invited to attend the WWDC keynote. WWDC promises to be quite exciting this year, as rumors have suggested a whole slew of products could see an unveiling, including a new streaming music service, a new streaming television service, and a new Apple TV. We'll also see iOS 9 and OS X 10.11.

Proceeds from today's auction benefit the RFK Center for Justice and Human Rights, a charity that Tim Cook has now supported for three years running. The RFK Center aims to achieve "a just and peaceful world by partnering with human rights leaders, teaching social justice, and advancing corporate responsibility."

And why is the value of lunch with Tim dropping by roughly 40% each year? :eek:


Maybe people are realizing that they are getting no insider information, and are able to provide zero influence.

Winner - Hi tim
Tim - hello winner
Winner - So when will you finally get a TV out
Tim - this is a great salad, dont you think
Winner - Are you really working on a car
Tim - would you like some more ice tea
Winner - Can you please add more ports to your devices
Tim - check please
Score: 15 Votes (Like | Disagree)

It's time to get some real answers from ol' Tim. Just where is the bluetooth port on my Mac? And how do they fit an entire apple into each product?
Score: 6 Votes (Like | Disagree)

How do people have so much money?? Gosh :eek:


And why is the value of lunch with Tim dropping by roughly 40% each year? :eek:
Score: 5 Votes (Like | Disagree)

And why is the value of lunch with Tim dropping by roughly 40% each year? :eek:

sampaul
How do people have so much money?? Gosh :eek:
Score: 3 Votes (Like | Disagree)
Read All Comments