Bloomberg Businessweek has published an in-depth profile of Apple senior vice president Johny Srouji that reveals how the iPad Pro was originally planned for a spring 2015 launch with the same A8X chip powering the iPad Air 2. The 12.9-inch tablet was running behind schedule, however, and Apple ultimately decided to delay announcing the device until late 2015 at its annual iPhone event. 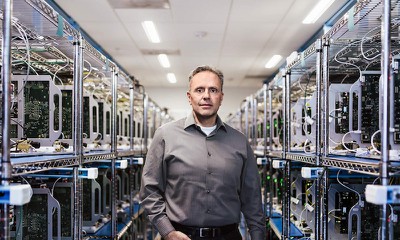 Apple realized the 12.9-inch tablet would seem lacking alongside the A9-based iPhone 6s, so Srouji and his team were challenged to fast-track development of the A9X chip by half a year. The chip was ultimately finished on time, and Srouji was rewarded with a promotion to Apple's executive team as Senior Vice President of Hardware Technologies and 90,000 RSUs in December.

Apple-designed chipsets allow the company to deeply integrate hardware and software on iPhones and iPads, but Srouji admitted that silicon development is not easy.

If there’s a bug in software, you simply release a corrected version. It’s different with hardware. “You get one transistor wrong, it’s done, game over,” Srouji says. “Each one of those transistors has to work. Silicon is very unforgiving.” Among computer and smartphone makers, industry practice is to leave the processors to specialists such as Intel, Qualcomm, or Samsung, which sink billions into getting the chips right and making them inexpensively.

Apple did not always develop its own chips, as the profile explains. The original iPhone, for example, used components from different vendors, including a Samsung chip used in DVD players.

“Steve came to the conclusion that the only way for Apple to really differentiate and deliver something truly unique and truly great, you have to own your own silicon,” Srouji says. “You have to control and own it.”

The feature-length interview provides detailed background on Srouji, from his beginnings in Israel to his current years at Apple. It also corroborates rumors that Apple will launch a new A9-based 4-inch iPhone and A9X-based iPad Air 3 at its March 15 event.

Dilster3k
Apple's work these last few years in this department has truly been extraordinary. With the A4, A7 & A9 being real stand-outs.
Score: 14 Votes (Like | Disagree)

We would love to see how Apple handles quad core chip if at all they release such type of SOC in future. I am getting bored of dual cores.

I'm surprised Apple's budget requires them to buy shelving from Target ('http://www.target.com/p/adjustable-5-tier-wire-shelving-unit-black-room-essentials/-/A-13892293?ci_src=17588969&ci_sku=13892293&ref=tgt_adv_XS000000&AFID=google_pla_df&CPNG=PLA_Storage%2BOrganization%2BShopping&adgroup=SC_Storage%2BOrganization&LID=700000001170770pgs&network=g&device=c&location=9021612&gclid=CIH5uPrGgcsCFQ-raQod-F8GIA&gclsrc=aw.ds'). Maybe still SOP from Ron. Anyone have any insight as to what are on the shelves? Just open-air servers?

Just because you have a massive budget doesn't mean you need to use all of it. Why spend an extra $50 on each shelf when the $40 shelf meets all your needs. The savings is extra money you can invest somewhere else.
Score: 9 Votes (Like | Disagree)

so Srouji and his team were challenged to fast-track development of the A9X chip by half a year.

Imagine being tasked with something this hard, almost impossible and yet they did it. Hard not to admire the balls of Apple to ask for it and the even bigger balls of Srouji to say it could be done and then doing it! I'm glad he was rewarded, so many make millions just by turning up, this guy clearly does much more than that!
Score: 8 Votes (Like | Disagree)

djcerla
Apple: "Next, beat the core i7, deadline two months"

“Steve came to the conclusion that the only way for Apple to really differentiate and deliver something truly unique and truly great, you have to own your own silicon,” Srouji says. “You have to control and own it"

mmm... a hint that we're getting rid of Intel chips on Macs?
Score: 6 Votes (Like | Disagree)
Read All Comments