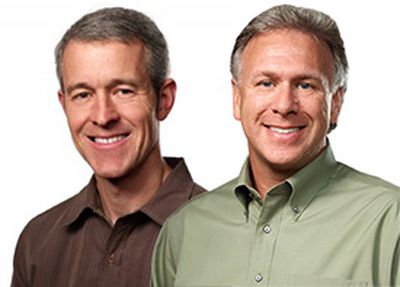 As vice president of operations since 2004, his responsibilities included overseeing Apple's supply chain, service and support, and the company's social responsibility initiatives protecting its employees worldwide. He also continues to supervise development of the Apple Watch and ResearchKit.

“We are fortunate to have incredible depth and breadth of talent across Apple’s executive team. As we come to the end of the year, we’re recognizing the contributions already being made by two key executives,” said Tim Cook, Apple’s CEO. “Jeff is hands-down the best operations executive I’ve ever worked with, and Johny’s team delivers world-class silicon designs which enable new innovations in our products year after year.”

Apple's COO position had been vacant since Cook was named CEO in August 2011.

Cook continued, “In addition, Phil is taking on new responsibilities for advancing our ecosystem, led by the App Store, which has grown from a single, groundbreaking iOS store into four powerful platforms and an increasingly important part of our business. And I’m incredibly happy to welcome Tor Myhren, who will bring his creative talents to our advertising and marcom functions.”

Srouji joined Apple in 2008 to lead development of the A4 chip, and now oversees the company's silicon and hardware technologies, including batteries, application processors, storage controllers, sensors silicon, display silicon and other chipsets across Apple's entire product line. He previously worked at Intel and IBM in the areas of processor development and design.

Myhren will be responsible for Apple's advertising and marketing communication efforts across a range of creative disciplines, including video, motion graphics, interactive web design, packaging and retail store displays. The experienced advertising executive will succeed Hiroki Asai, who is retiring after 18 years in graphic design and marketing communications roles at Apple.

Update: While Williams is often described as "Tim Cook's Tim Cook," The Wall Street Journal has learned that his new COO title is more about formalizing a role he had within Apple, as opposed to grooming him to be the next Apple CEO.

The leadership changes are reflected on Apple's executive profiles page.

tevion5
Put Craig in charge of everything.
Score: 29 Votes (Like | Disagree)

vmachiel
Ok Phil we need trials and upgrade pricing in the App store, and... just a general working MAS.
Score: 20 Votes (Like | Disagree)

sjinsjca
Great news about Schiller. My sense is that the App Stores have stagnated, especially for platforms other than iDevices. For example, what was a great potential differentiator for the Mac has become something of a burden. And discovery of Watch apps is needlessly opaque.

Schiller's a great choice for injecting new energy and direction across the platforms. Go, Phil!
Score: 18 Votes (Like | Disagree)

They need to give developers more options like trials, paid upgrades, etc. It will improve the quality of the product that developers put out by giving them motivation to update their apps rather than create/dump/create/dump.
Score: 8 Votes (Like | Disagree)

Being the richest country in the world with billions upon billions in untaxed cash sitting somewhere is definitely a big call for a shakeup.

I don't get it. Is it an ego thing? How much more money can a company make?

Personally, I'd like to see everyone involved in the Apple Watch get shown the door, but whatever.

I'd also like whoever made the decision to make games for the Apple TV have to work with the godawful remote go as well.

I think the cash pile was, originally, a leverage tool that Tim Cook (in the Jobs days) was especially good at utilizing. They could get priority manufacturing access by giving out loans to manufacturing partners to build out infrastructure and generally throw their wait around. Tim liked having that tool.

However, the cash pile has gotten so big it's looking silly. Apple should be reinvesting like crazy if they think they have room for growth, or returning it to shareholders.

Unless Tim Cook is secretly saving up to buy a country or something.
Score: 7 Votes (Like | Disagree)

levitynyc
Being the richest country in the world with billions upon billions in untaxed cash sitting somewhere is definitely a big call for a shakeup.

I don't get it. Is it an ego thing? How much more money can a company make?

Personally, I'd like to see everyone involved in the Apple Watch get shown the door, but whatever.

I'd also like whoever made the decision to make games for the Apple TV have to work with the godawful remote go as well.
Score: 7 Votes (Like | Disagree)
Read All Comments