Digitimes reports that Apple has finalized plans for its fifth-generation iPad, targeting a September launch for the redesigned device that is rumored to be taking design cues from the iPad mini with narrower side bezels and a thinner body.

Since upstream suppliers have mostly finished preparing for the production of the new 9.7-inch iPad, there is unlikely to be any changes in terms of specifications for the device. [...]

Although suppliers have not yet received a firm mass production schedule from Apple and are mainly shipping products for pilot production, the sources pointed out that pilot production is already able to satisfy demand for the initial launch. Therefore, the sources expect Apple to give its shipment estimates at the end of July or early August.

The report indicates, however, that plans for the next-generation iPad mini remain unsettled, with Apple still working to incorporate a Retina display into the device. If the company does elect to bring a Retina display to its next iPad mini, the device could see a launch very late this year. The report also indicates that Apple has been pushing to reduce the width of the iPad mini's side bezels even further. 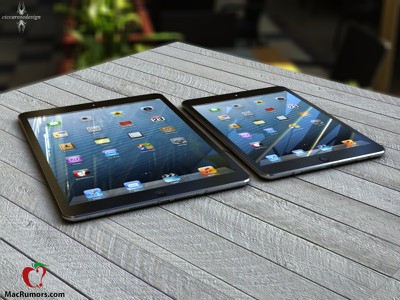 Mockup of fifth-generation iPad next to iPad mini
Today's claims are very similar to ones made in an early June report from Digitimes indicating updated iPad and iPad mini models may not appear simultaneously, with the iPad mini trailing the iPad by several months.

KGI Securities analyst Ming-Chi Kuo has also indicated that issues related to a Retina display were likely to result in a later-than-expected launch for the next iPad mini. Kuo's modeling back in April had estimated that the device could be updated some time in the September-November timeframe, while he believed that the full-size iPad would see shipments ramping in August or September.

Analysts at NPD DisplaySearch have also been expressing uncertainty about Apple's plans for its second-generation iPad mini, with their most recent report last month indicating that they expect Apple to launch a thinner non-Retina iPad mini late this year, with a Retina update coming relatively soon after in early 2014.

fertilized-egg
Oh man, this is so much fun! We should've had a lot of new iPads by now.

seecoolguy
after trying out the HTC One, I keep wondering why Apple never incorporated a front facing speaker? makes video watching that much more fun as you don't have to turn up the volume so high, and no need to cup your hand over the edge of the device. wonder when this will come to the iDevice?
Score: 6 Votes (Like | Disagree)

128GB for a decent price, would be nice!


I think 128GB will be the new 64GB version in the new model, and they'll drop the 16GB version in the full sized retina iPad (perhaps still offer it in an iPad 2 if they still offer the non-retina option). This will in the minds of consumers create additional value in the flagship iPad, which is more expensive, in that it'll have the larger size with more screen real estate (a thin beautiful mini-type chassis), plus it'll come standard with 32GB and offer 64GB and 128GB options, where the mini will continue to offer storage in 16/32/64GB sizes.
Score: 5 Votes (Like | Disagree)

appleisking
Unlikely to be any changes in the specs? How is that possible?

Why? You think the mini size is better? I mean besides the cost, which is a clear advantage - why would I want a mini?


It's more portable. I'd rather carry the mini along everywhere as opposed to the ipad.
Score: 5 Votes (Like | Disagree)
Read All Comments

Wednesday June 16, 2021 7:11 am PDT by Hartley Charlton
With no sign of redesigned MacBook Pro models at this year's WWDC, when can customers expect the much-anticipated new models to launch? A number of reports, including investor notes from Morgan Stanley and Wedbush analysts, claimed that new MacBook Pro models would be coming during this year's WWDC. This did not happen, much to the disappointment of MacBook Pro fans, who have been...
Read Full Article • 209 comments

Wednesday June 16, 2021 10:49 am PDT by Juli Clover
Apple CEO Tim Cook this morning participated in a virtual interview at the VivaTech conference, which is described as Europe's biggest startup and tech event. Cook was interviewed by Guillaume Lacroix, CEO and founder of Brut, a media company that creates short-form video content. Much of the discussion centered on privacy, as it often does in interviews that Cook participates in. He...
Read Full Article • 287 comments