With rumors of the fifth-generation iPad taking on a design similar to that of the iPad mini, we've once again commissioned CiccareseDesign to create some fresh renderings offering a very good idea of what the updated iPad will look like.

These images are based on the leaked iPad 5 enclosure, which we have reason to believe is indeed real.

The new iPad shell was shown alongside an iPad mini enclosure, providing CiccareseDesign a frame of reference from which to take measurements and produce these mockups. We believe the relative sizes shown in the following images offer an accurate view of how the upcoming iPad 5 will compare in size. 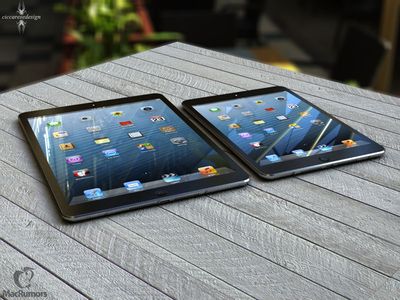 iPad 5 next to iPad mini
As has been described in rumors and calculated from the rear shell photos, the fifth-generation iPad appears to be notably smaller than the current model, adopting significantly thinner side bezels in portrait orientation and slightly smaller top and bottom bezels.

In fact, our extrapolated dimensions appear to be almost identical to a December claim from Mac Otakara, which specified that the fifth-generation iPad would be 4 mm shorter and 17 mm narrower than the existing design. That report also claimed that the next iPad will be 2 mm thinner than the current model, making it nearly identical in thickness to the iPad mini.

iPad 5 on top of iPad 4
While some early rumors had suggested that Apple might be looking to update the iPad and iPad mini as soon as March, sources with rather reliable track records are now pointing to a later release in the September-October timeframe, and Apple's just-launched 128 GB iPad models support that notion.

Left to Right: iPad 4, iPad 5, iPad mini
The fifth-generation iPad is said to adopt nearly identical styling to the iPad mini, with photos showing a similarly anodized rear shell and reports claiming that it will include the same chamfered edges as on its smaller sibling. The comparison photo above shows the smaller size of the iPad 5 and how it has taken on the design cues of the iPad mini.

Left to Right: iPad 5, iPad mini, iPhone 5
The smaller body of the fifth-generation iPad suggests that Apple is making major changes to the device's internals as well. Apple has been rumored to be adopting new display technology that will allow for a thinner display and perhaps a smaller battery, and other components such as the main system-on-a-chip are also likely to see upgrades and rearrangements as part of the significant revamp of its full-size iPad.
Related Roundup: iPad
Buyer's Guide: iPad (Buy Now)
Related Forum: iPad
[ 287 comments ]

And then touch the screen with your thumbs all the time. I also think it's not that good looking. But that's just me.


Apple is trying to address the thumb-on-screen thing with software. With iPad mini, they added edge touch detection logic.

iPad mini intelligently recognizes whether your thumb is simply resting on the display or whether youre intentionally interacting with it. Its the kind of detail youll notice  by not noticing it.

gregwyattjr
I feel like everyone wanted a thin-bezeled iPad since the very beginning.
Score: 33 Votes (Like | Disagree)


It's difficult to revolutionize one of your best selling products. I think the redesign, new internals, new screen tech, camera upgrades, iOS 7, will all equate to a great update.
Score: 32 Votes (Like | Disagree)

I feel like everyone wanted a thin-bezeled iPad since the very beginning.


And then touch the screen with your thumbs all the time. I also think it's not that good looking. But that's just me.
Score: 28 Votes (Like | Disagree)

Friday January 27, 2023 10:01 am PST by Juli Clover
Multiple rumors have suggested that the next-generation iPhone 15 models will adopt the Wi-Fi 6E standard that Apple has already introduced in the iPad Pro and MacBook Pro, and now a leaked document appears to confirm Apple's plans. Sourced from researcher and Apple leaker Unknownz21 (@URedditor), the document features diagrams of the iPhone 15's antenna architecture. D8x refers to the...
Read Full Article • 226 comments