Back in January, reliable KGI Securities analyst Ming-Chi Kuo laid out a thorough roadmap of his expectations for Apple's product launches in 2013, pointing to a very busy third quarter for the company with launches for updated iPhone, iPad, iPod, and Mac notebook lines. As recently as last month, Kuo was targeting a June/July launch for the new iPhone models, with a version specific to China Mobile arriving a bit later in September.

Kuo has released a new report today indicating that a number of challenges appear to be pushing back the release of the new iPhone and iPad mini models relative to his previous predictions and general market consensus. As a result, Kuo believes that Apple's third quarter may see much smaller shipment growth than previously expected. Apple of course has not announced its launch plans, so any "delays" are relative to these market expectations and not necessarily Apple's internal plans.

Earlier we estimated that shipments of the new iPhone would begin in July (FDD version) and September (TDD version), while iPad mini 2 would hit the market in August. Currently, market consensus for shipments of iPhone 5S, low-cost iPhone and iPad mini 2 is July, July, and August, respectively. But in light of publicly available information and our knowledge of technological trends, we now think all three products will begin shipments later than our previous expectation and market consensus.

Kuo does not provide a new specific target date for the launches of the updated models, instead laying out a series of three scenarios modeling how Apple's shipments could be affected based on August/September, September/October, and October/November timeframes. 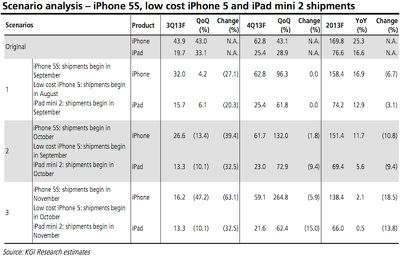 As for details on the challenges facing Apple, Kuo lays out the following issues:

- Fingerprint sensor for iPhone 5S. Work on finding the right color coatings in order to prevent interference with the sensor offers a technical challenge for Apple, and software integration in iOS 7 will also require additional work.

- Color coatings for lower-cost iPhone. Apple's lower-cost iPhone has been rumored to be arriving with a plastic shell in a number of different colors, and Apple's efforts to keep the shell as thin as possible will likely lead to production ramping issues for coatings and surface treatments.

As a result of later-than-expected launches, Kuo currently predicts that Apple will see only single-digit growth of total iPhone/iPad shipments year-over-year for the third quarter of 2013, far below current market expectations of 30-40% growth.

Kuo's report comes as Morgan Stanley's Katy Huberty has released her own report projecting new iPhone launches for September following an iOS 7 preview at Apple's Worldwide Developers Conference (WWDC) expected in June. Huberty projects that Apple will show off a new "killer app" such as mobile wallet at WWDC, with the new iPhone and iPad hardware following several months later.

lifeinhd
"Reliable analyst" made me lol.
Score: 11 Votes (Like | Disagree)


Anything else I'm forgetting?

Come on Apple! Please, please I hope that this supposed fingerprint sensor is NOT the supposed "killer feature" (a la Siri). Give me a bigger screen and WIDER one while you're at it.


Wow, a bigger, wider screen. How innovative. Nobody has done that before. That'll sure send AAPL through the roof!
Score: 8 Votes (Like | Disagree)

AZREOSpecialist
Samsung can launch three or four different phone models each year of various sizes and Apple can't even upgrade it's one phone product without experiencing delays?
Score: 7 Votes (Like | Disagree)

MTL18
Phew, thanks for the update.

I was worried that Apple wouldn't refresh at an annual pace and sell products. Glad these analysts helped me out with numbers and things.
Score: 7 Votes (Like | Disagree)
Read All Comments