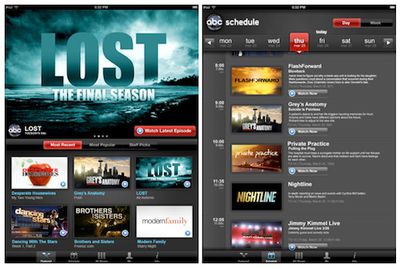 The Wall Street Journal reports (subscription required) that both ABC and CBS are preparing to deploy free, ad-supported streaming of their television content to the iPad, with CBS planning to utilize browser-based streaming while ABC will deliver its content through a standalone application that has already appeared in the App Store.

By Saturday, CBS plans to have full episodes of the reality series "Survivor" ready for an iPad-specific version of its CBS.com Web site. It also plans to offer promotional clips of several other shows, including crime-solving drama "The Mentalist" and sitcom "How I Met Your Mother."

"We're working very hard to make as much of it available as possible," Neil Ashe, president of CBS Interactive, said in an interview. "Over time, it'll be the same as online."

The report notes that episode streaming from the networks will serve to sidestep Apple's iTunes Store, where users can purchase commercial-free episodes of their favorite television shows. Apple has reportedly been urging networks to reduce iTunes pricing for their shows to $0.99 in order to stimulate demand, but the networks have resisted such encouragement, and today's report claims that a number of media companies have rejected the idea. It reportedly remains unclear whether any company will adopt the reduced pricing by the iPad's launch on Saturday.

Meanwhile, The New York Times repeats claims that Hulu is considering bringing its content to the iPad in the form of paid subscriptions.

Mr. Kilar declined to talk about any future Hulu products, but he waxed enthusiastic about the coming wave of ultra-portable tablet computers like the iPad.

"Typically media consumption in the house was confined to the living room or home office," he said. Tablets, he added, "allow consumers to serendipitously discover and consume media in every room of the house."

A February report indicated that Hulu was pursuing non-Flash technologies for bringing its content to the iPad, with subsequent claims noting that such an offering would likely be subscription-based.