With the imminent arrival of the Apple iPad, it seems at least one major television network is updating their website to provide video playback support for new tablet device -- without Flash. CBS.com's website began displaying a couple of strange "iPad - test" video links, first noted by The Other Mac Blog.

We investigated further and found that clicking on these "iPad" labeled links in your normal desktop browser brings you to the usual Flash versions of these videos. Of course, these wouldn't properly play on the Apple iPad due to Apple's well known decision not to support Flash. However, if you visit CBS.com using the iPad SDK Simulator or spoofing your browser's User-Agent to impersonate an iPad, you are sent to a different version of the video: 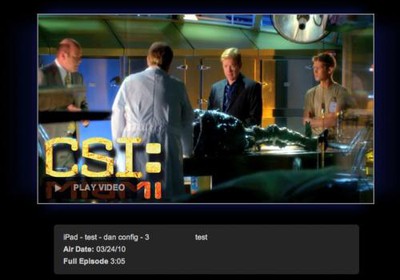 This new version of the video does not yet work but appears to be based on HTML5. The css files reference HTML5 and have a number of "webkit" specific calls. Webkit is the browser engine used in the iPad's mobile safari. While the videos don't currently play, the "fullscreen mode" reportedly already works in the iPad simulator.

Apple has been a strong proponent of HTML5 and has suggested it as an alternative solution to Flash. It appears at least one major network will be supporting HTML5 alongside Flash video to deliver their content at iPad launch.