By MacRumors Staff on July 10, 2018
Boy Genius Report, also known as BGR, is a technology and consumer electronics-focused website that was started by Jonathan Geller. Originally created in secret, Geller was not revealed as the site's creator until 2010.

In its early days, BGR was known for breaking rumors on upcoming Apple devices and services, but in recent years, it has not been a source for emerging news on Apple products. The site does, however, occasionally share information on release dates for upcoming iOS updates, which are hit or miss. Tuesday July 10, 2018 8:13 am PDT by Joe Rossignol
Apple plans to deploy 1Password internally to all of its corporate and retail employees around the world over the next few months, according to BGR's editor-in-chief Jonathan Geller, who cites an unnamed source. The report claims Apple plans to offer a free license to the standalone version of 1Password to each of its employees and their families:According to our source, after many months of ...
Read Full Article 207 comments 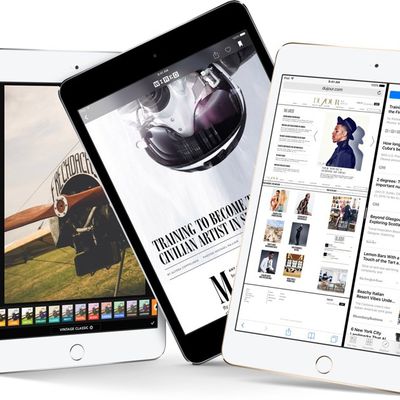 Tuesday May 16, 2017 7:49 am PDT by Joe Rossignol
Waiting for an iPad mini 5? You may be disappointed. BGR, citing a source close to Apple, claims the 7.9-inch tablet is being phased out. The report doesn't offer a timeline as to when the iPad mini will be discontinued, and its sources couldn't confirm if the iPad mini 4 will remain on sale for a period of time. Apple is rumored to introduce a new 10.5-inch iPad Pro as early as the WWDC...
Read Full Article 365 comments

Monday May 15, 2017 12:39 pm PDT by Juli Clover
Apple is planning major new health features for future versions of the Apple Watch, according to a new report from BGR citing sources with knowledge of Apple's plans. The company is said to be working on implementing a new glucose monitoring feature and interchangeable smart bands, which could add new health functionality to the Apple Watch. Both features have been previously rumored in the...
Read Full Article 173 comments

Monday June 22, 2015 7:57 am PDT by Joe Rossignol
Apple plans to seed iOS 8.4 Golden Master (GM), which has historically been release candidate software, to registered developers today ahead of the Apple Music launch on June 30, reports BGR. iOS 9 beta 2 is also reportedly scheduled for release today, although it is possible that the release date is pushed back by one week to next Monday, June 29. The iOS 8.4 GM will succeed iOS 8.4 beta 4...
Read Full Article 101 comments

Friday February 27, 2015 8:23 am PST by Juli Clover
Apple may be planning to release iOS 8.2 to the public as early as next Monday, reports BGR. iOS 8.2 has been in testing since November and notably contains support for the Apple Watch. The March release date has been rumored for several weeks now, but earlier information pointed towards a launch a bit later in the month, possibly during the second week of March. A Monday, March 2 release date ...
Read Full Article 164 comments

iOS 8.2 May Be Released in March, Ahead of April Apple Watch Launch

Tuesday February 3, 2015 8:42 am PST by Juli Clover
Apple's next major iOS update, iOS 8.2, includes the WatchKit API and support for the Apple Watch, so it's been widely assumed that the software will launch alongside the device. According to sources that spoke to BGR, iOS 8.2 may not be released at the same time as the Apple Watch after all, coming instead in March. An unspecified March release date means the software could come just a week...
Read Full Article 76 comments

Thursday September 18, 2014 11:49 am PDT by Eric Slivka
Ahead of tomorrow's launch of the iPhone 6 and 6 Plus in a number of countries, customers who didn't place pre-orders for delivery have been lining up at Apple's retail stores and those of its carrier and retail partners hoping to obtain one first thing in the morning. A new report from BGR claims, however, that those looking for an iPhone 6 Plus are likely to be disappointed, as the units...
Read Full Article 269 comments

Tuesday August 19, 2014 7:12 am PDT by Kelly Hodgkins
While Apple released a sixth developer preview of OS X Yosemite yesterday, a corresponding sixth beta of iOS 8 was not provided to developers at the same time. As a result, the company's iOS beta 5 released earlier this month may turn out to be the final build seeded to developers before the golden master release. Though developers may not see another beta version, a new report from BGR claims ...
Read Full Article 103 comments

Wednesday July 16, 2014 6:59 am PDT by Eric Slivka
As iOS 8 proceeds through development and testing, the fourth beta version will be seeded to developers on Monday, July 21, according to BGR. A release on that date would mark a two-week interval since the release of the third beta on July 7, down from a roughly three-week interval between the second and third betas. BGR regularly publishes reports predicting future release dates for iOS...
Read Full Article 79 comments

Thursday June 26, 2014 7:28 am PDT by Eric Slivka
The third beta release of iOS 8 will not occur until Tuesday, July 8, according to a report from BGR. That timeframe would mark a three-week interval following the release of the second beta last week. Apple commonly begins seeding versions of its major new iOS versions on roughly two-week intervals, moving to three-week intervals later in the testing period as work progresses. For example,...
Read Full Article 86 comments

iOS 7.1 Beta 4 May Be Released to Developers Tomorrow

Monday January 20, 2014 7:20 am PST by Kelly Hodgkins
Apple may be close to releasing iOS 7.1 beta 4 to developers, according to a report by BGR. The new beta is reportedly in the hands of testing partners and is slated to be released to developers as soon as tomorrow. The beta will be the fourth of a reported six planned developer builds for iOS 7.1. We are told there are various fixes in this latest version, including fixing keyboard issues,...
Read Full Article 51 comments

Monday August 19, 2013 7:20 am PDT by Eric Slivka
BGR reports that Apple is planning to launch the seventh beta version of iOS 7 today.We are told by our trusted sources that Apple has once again seeded a new build of iOS 7 to partners, and that it should be released to developers later today. We can confirm the build number is much higher than the previous beta, and we would assume that iOS 7 beta 7 should be distributed and made available for...
Read Full Article 301 comments

Thursday August 15, 2013 7:30 am PDT by Eric Slivka
BGR reports that its sources have laid out a rough timeline for the final developer seeds of iOS 7, unsurprisingly noting that Beta 6 should arrive sometime next week, roughly two weeks after the release of Beta 5. The report indicates that Beta 6 is planned to be the final developer release before Apple finalizes iOS 7 with a golden master build. That golden master is expected to be seeded to ...
Read Full Article 284 comments

Friday June 28, 2013 8:26 am PDT by Eric Slivka
BGR reports that Apple is planning to release the third beta version of iOS 7 to its carrier partners on Monday, July 8, with seeding to registered developers expected on the same day.BGR has been informed by trusted sources that iOS 7 beta 3 is currently scheduled to be made available to carriers for testing on July 8th. These are the same sources who accurately foretold the release timing of...
Read Full Article 229 comments

Monday October 22, 2012 7:40 am PDT by Eric Slivka
BGR reports that Apple has begun carrier testing of iOS 6.0.1, the first bug fix update to iOS 6 since its release just over a month ago. According to the report, iOS 6.0.1 addresses several issues including a visual glitch most commonly seen on the iPhone keyboard when entering an account password in the App Store.iOS 6.0.1 should fix the horizontal lines bug on the screen when the keyboard or...
Read Full Article 203 comments

Monday August 13, 2012 9:06 am PDT by Eric Slivka
BGR reports that AT&T is apparently targeting an iPhone launch in the third or fourth week of September, shifting to an "all-hands-on-deck policy" through mid-October to help handle the surge of customers that inevitably accompanies new iPhone launches.According to a trusted AT&T (T) source, the carrier is currently planning to launch Apple’s (AAPL) next-generation iPhone during the third or...
Read Full Article 66 comments

Thursday July 19, 2012 6:59 am PDT by Eric Slivka
Following a report earlier this week claiming that European carriers have been stockpiling new nano-SIM cards in expectation of Apple using the smaller card in the next-generation iPhone, BGR now reports that carriers are indeed testing the new cards in partnership with Apple. Multiple carrier sources have exclusively told BGR that Apple is supplying nano-SIM adapters so its carrier partners can...
Read Full Article 40 comments

Wednesday July 18, 2012 7:45 am PDT by Eric Slivka
Disputing a report from last weekend claiming that Apple has begun production on the next-generation iPhone, BGR now claims that the device is still in engineering testing and has yet to enter production.Apple goes through multiple stages before a product is manufactured, and two of these include the “engineering verification test” stage and the “design verification test” phase. Apple’s ...
Read Full Article 139 comments

Friday June 8, 2012 8:15 am PDT by Eric Slivka
Following up on its report from last week claiming that Apple will show off the operating system for its future television set product at next week's Worldwide Developers Conference, BGR now briefly reports that Apple will be using the event to introduce a new software development kit (SDK) to allow third-party developers to build apps for the Apple TV.We have heard from a trusted source that...
Read Full Article 371 comments

Wednesday May 30, 2012 7:16 am PDT by Eric Slivka
BGR claims to have received information from a "trusted source" indicating that Apple will demonstrate the operating system for its television set at its Worldwide Developers Conference (WWDC) next month. The company is reportedly making a public unveiling of the operating system ahead of the actual product in order to allow third-party manufacturers to build functionality into their components...
Read Full Article 189 comments
Newer Posts
Archives
Older Posts