Disputing a report from last weekend claiming that Apple has begun production on the next-generation iPhone, BGR now claims that the device is still in engineering testing and has yet to enter production.

Apple goes through multiple stages before a product is manufactured, and two of these include the “engineering verification test” stage and the “design verification test” phase. Apple’s sixth-generation iPhone is currently in the EVT3 stage, the third revision of the engineering test stage, and has not yet entered the DVT stage. 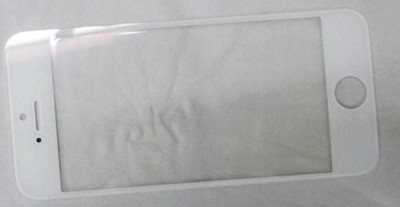 Claimed front panel from next-generation white iPhone
The report also claims to have confirmed several hardware details on the forthcoming iPhone, including the unsurprising inclusion of LTE connectivity, a bump to 1 GB of RAM from the 512 MB found in the iPhone 4S, and near field communication (NFC) technology that could significantly enhance the utility of Apple's Passbook app for iOS 6 unveiled last month.
Tag: bgr.com
[ 139 comments ]

What happened to the down vote button?:confused:
Score: 33 Votes (Like | Disagree)

jayhawk11
Does it seriously need to be said? BGR is almost as unreliable as Digitimes. They've consistently been wrong about everything in the past 18 months.
Score: 17 Votes (Like | Disagree)

SHUT UP AND TAKE MY MONEY!
Score: 16 Votes (Like | Disagree)

Baklava
With every leaked iPhone 5 front-panel photo I somehow like the new wider design more and more. :)
Score: 15 Votes (Like | Disagree)

Big-TDI-Guy
With NFC, Apple will literally allow you to shut up, while they take your money. ;)
Score: 12 Votes (Like | Disagree)

canyonblue737
BGR is, as always, clueless.
Score: 11 Votes (Like | Disagree)
Read All Comments

Thursday July 9, 2020 10:14 am PDT by Juli Clover
Apple today seeded the first public betas of upcoming iOS and iPadOS 14 updates to its public beta testing group, two weeks after first providing the updates to developers after the WWDC keynote and a day after seeding the second developer betas. Public beta testers who have signed up for Apple's beta testing program can download the iOS/‌iPadOS‌ 14 updates over the air after installing ...
Read Full Article • 140 comments

Wednesday July 8, 2020 3:14 pm PDT by Juli Clover
Apple is working on Macs that use its custom Apple-designed Apple Silicon chips instead of Intel chips, but Apple has committed to continuing to support Thunderbolt, reports The Verge. In a statement, an Apple spokesperson said that Apple's upcoming machines will offer support for Intel's Thunderbolt USB-C standard. "Over a decade ago, Apple partnered with Intel to design and develop...
Read Full Article • 197 comments