The third beta release of iOS 8 will not occur until Tuesday, July 8, according to a report from BGR. That timeframe would mark a three-week interval following the release of the second beta last week.

Apple commonly begins seeding versions of its major new iOS versions on roughly two-week intervals, moving to three-week intervals later in the testing period as work progresses. For example, with iOS 7 last year, the second and third betas arrived two weeks after their predecessors with the fourth beta shifting to a three-week interval. Apple did, however, then follow that with several intervals of around a week as it pushed out an urgent bug fix.

iOS 6 followed a similar pattern without the interim bug fix, seeing a two-week interval leading up to the second beta before quickly shifting to three-week intervals for the third and fourth betas.

BGR has a good, but not perfect, track record in predicting iOS beta releases, so it seems likely that there will be no iOS 8 beta release next week.

Thank god you are a developer and have this on your developer phone and not on your daily driver right?


I'm a starving developer so my developer phone is my daily driver. Am I allowed under your rules?
Score: 28 Votes (Like | Disagree) 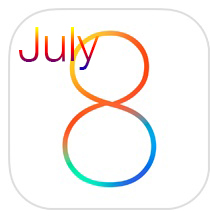 Thank god you are a developer and have this on your developer phone and not on your daily driver right?


Dear me, do we always have to have these comments every time someone complains that a Beta is buggy? Yep, some people use it on their main devices, some of those aren't even developers. They generally know the risk they're taking when they make that choice. But why can't they express their comments about the current Beta and hopes for the next without always drawing a snidey, predictable response?
Score: 10 Votes (Like | Disagree)

Being 100% realistic, since BGR is saying July 8, it's a safe bet that it will be ANY other day but July 8


Agreed. MR already knows that a bit of web traffic comes from Apple's campus, so somebody in Cupertino is keeping up to date. I like to think Tim occasionally reads the articles and deliberately tells them to release at a different date as an epic troll move.

Damn. Beta 2 is the buggiest ios beta I've ever tested. No 4G, and twice now my phone has completely frozen on me with the only way to fix it being to wait 4 hours for the battery to run out before charging again!!

Thank god you are a developer and have this on your developer phone and not on your daily driver right?
Score: 6 Votes (Like | Disagree)
Read All Comments