The current Mac Pro and Pro Display XDR launched three years ago today, marking Apple's return to a modular tower design for its flagship desktop Mac, as well as the company's re-entry into the external display market. 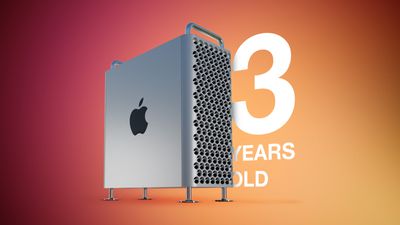 In April 2018, Apple uncharacteristically confirmed that a redesigned ‌Mac Pro‌ would be released in 2019 to replace the controversial "trashcan" model from 2013. The new machine was officially unveiled at WWDC 2019 alongside the Pro Display XDR, Apple's first new display since 2011's Thunderbolt display. The ‌Mac Pro‌ and Pro Display XDR finally launched on December 10 of that year.

The 2019 ‌Mac Pro‌ features a prominent lattice pattern originally designed for the Power Mac G4 Cube in 2000, and the internals can be easily accessed by sliding off the casing. The machine contains eight PCIe slots for expansion and was praised for its modularity and repairability. It can be purchased in a rack mount configuration or with wheels for an additional $400.

The ‌Mac Pro‌ includes three impeller fans to allow it to run at peak performance, and supports up to 1.5TB of memory, two AMD Radeon Pro GPUs, and Intel Xeon chips with up to 28 cores. It can also be configured with Apple's custom Afterburner card for accelerating ProRes. The Pro Display XDR shares the ‌Mac Pro‌'s lattice design and offers a high-resolution, 32-inch 6K panel that can replace a reference monitor.

Three years after launch, the ‌Mac Pro‌ is one of the last Intel-based Mac models still on sale and the only remaining Mac product line with no Apple silicon chip options. An all-new model that finally brings Apple silicon to the company's top-tier Mac aimed professionals has now been anticipated for over two years. At its "Peek Performance" event earlier this year, Apple even directly teased the launch of the Apple silicon Mac Pro, saying "that's for another day."

Previously, reports about a smaller Mac Pro model placed somewhere between the Mac mini and the ‌Mac Pro‌ made it difficult to know what to expect from the future of the high-end ‌Mac Pro‌ line, but it is now clear many of these rumors related to the Mac Studio, somewhat clarifying what can be expected from the next-generation ‌Mac Pro‌.

Multiple reports from Bloomberg's Mark Gurman about the Apple silicon ‌Mac Pro‌'s chip options and specifications provide a fairly straightforward picture of what to expect from the new flagship professional Mac. According to Gurman, users will be able to configure the new ‌Mac Pro‌ with "M2 Ultra" and "M2 Extreme" chip options.

Yet beyond its basic specifications, little is currently known about the device's design, ports, performance, and potential for modularity and customization, in real terms. Apple is expected to introduce the Apple silicon ‌Mac Pro‌ sometime next year, and it could come alongside a "Pro" version of the Studio Display with a mini-LED panel and support for ProMotion.

What an iconic piece of hardware and marvelous engineering. Way ahead of its time!

It’s literally a normal computer tower and a monitor.
Score: 26 Votes (Like | Disagree)

wonder how many that asked for a modular setup actually took advantage of it being modular?

feels like most people who bought a Mac Pro didn't really replace much inside. i think the trash can design made more sense and now that we have M chips, it makes even more sense.

So, I have freelanced in about 50 studios since 2010. This is what happened.

Mac Pro 2008-2012
Small Studios would Get one and upgrade it with various bits RAM/Raid - and Upgrade the GPUs every few years.
Large Studios would but the top of the Range - even the RAM but never actually change anything. They might put in another HD if requested.

Ultimately they were very annoyed that the GPU was NOT upgradable. If Apple had upgraded GPU alone, that would have been enough for most people.

MP 2019
Studios ARE upgrading these with NVME raid cards and Upgrading the GPUs. A few have pro audio PCIE cards. And of course the RAM - I have seen a steady upgrade over time - There are so many slots.

Whatever they do next - it better be upgradable and have similar RAM/storage/PCIE capability.
Score: 23 Votes (Like | Disagree)

TheYayAreaLiving ?
What an iconic piece of hardware and marvelous engineering. Way ahead of its time!
Score: 15 Votes (Like | Disagree)

What an iconic piece of hardware and marvelous engineering. Way ahead of its time!

If you removed your apple goggles for a moment you’d appreciate that it was six years behind its time. The 2019 Pro is the machine they should have released in 2013 rather than their idiotic trash can. By 2019 many pros would have sadly moved on to windows as they were fed up with a non serious Pro machine.
Score: 12 Votes (Like | Disagree)

thunderbolt solves most of that. minor performance hit with eGPUs but works fine. and you can add more than a few. would be even easier if apple made a thunderbolt addon case. easy swap in/out and connect via TB.

Why do some people find it so hard to imagine that a big box with many slots might already be the best possible solution for a particular user group? I suspect it's because the concept is almost as old as the personal computer. Jobs was pretty spot on with his trucks metaphor; just because a big engine with a lot of empty loading space on wheels is a very old idea doesn't mean it isn't the best solution for a particular task.
Score: 11 Votes (Like | Disagree)

geartau
wonder how many that asked for a modular setup actually took advantage of it being modular?

feels like most people who bought a Mac Pro didn't really replace much inside. i think the trash can design made more sense and now that we have M chips, it makes even more sense.
Score: 10 Votes (Like | Disagree)
Read All Comments