Apple is working on an updated model of its Mac Pro that may feature an Apple silicon chip with as many as 32 high performance cores, and a 128 core option for graphics, according to a new report from Bloomberg's Mark Gurman. 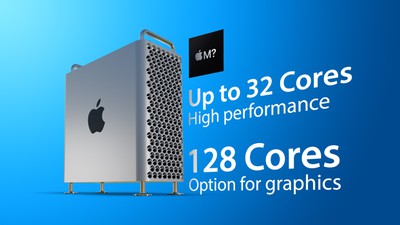 Bloomberg has reported in the past that Apple is working on an updated Mac Pro that will feature an Apple silicon chip rather than an Intel processor. Today's new report echoes a similar story but offers more details on the performance of this upcoming high-end Mac.

Bloomberg says there are two new ‌Mac Pro‌ models in the works, both featuring a redesign and are planned to "come in 20 or 40 computing core variations, made up of 16 high-performance or 32 high-performance cores and four or eight high-efficiency cores."

Codenamed Jade 2C-Die and Jade 4C-Die, a redesigned ‌Mac Pro‌ is planned to come in 20 or 40 computing core variations, made up of 16 high-performance or 32 high-performance cores and four or eight high-efficiency cores. The chips would also include either 64 core or 128 core options for graphics. The computing core counts top the 28 core maximum offered by today’s Intel ‌Mac Pro‌ chips, while the higher-end graphics chips would replace parts now made by Advanced Micro Devices Inc.

Alongside the faster, more powerful processor, the new ‌Mac Pro‌ will feature a smaller design that "could invoke nostalgia for the Power Mac G4 Cube," according to a previous Bloomberg report. Apple is also working on a successor to the current ‌Mac Pro‌ design that may use Intel processors rather than its own Apple silicon.

Why would this type of computer need efficiency cores? Is there something inherent in the design of the CPU which requires them.

I just ask as it seems that the space taken up by the efficiency cores could fit in more performance cores. Really this could be applied to all desktop models. For the Mac Pro they seem the most pointless.

Lemon Olive
So Apple's headless desktop offerings will consist of:

Great to hear, but how about a 64 core and 128 core version to really get these machines rocking past AMD.

Unless AMD has a 30-or-so watt part with 20 cores, seems these will already rock past AMD.
Score: 13 Votes (Like | Disagree)

Coleco
I realize it's a niche, but the entire purpose of this design was to provide modular upgrades. It would say a lot to those early adopters of this gen of Mac Pro if Apple offered a $1,000-$1,500 M1X or M2 CPU card that allowed an upgrade without the need to repurchase the entire Mac Pro. I imagine the Mac could dynamically adapt which CPU it would use based on whether the app is optimized for Apple Silicon (and, perhaps, even magically use the MacPro's discreet graphics cards where there was an advantage to doing so). This would allow those users to maintain backward compatibility, Windows compatibility and preserve their investment. It could also be billed as a more "green" upgrade than just a wholesale replacement. Realistically, I don't see that happening, but it would be a cool thing to do.
Score: 12 Votes (Like | Disagree)

Coming from you with your background, I'll take this report as impressive.
Score: 9 Votes (Like | Disagree)
Read All Comments

Bloomberg: Apple Working on Next-Gen Apple Silicon Chips for MacBook Pro, iMacs, and Mac Pro Due to Launch Next Year

Monday December 7, 2020 3:33 am PST by Tim Hardwick
Apple is working on a series of new custom Apple silicon processors to power upgraded versions of the MacBook Pro, new iMacs, and a new Mac Pro for introduction as early as next year, according to a new report by Bloomberg. Apple is said to be working on several successors to the M1 custom chip, its first Mac main processor that debuted in November in a new Mac mini, MacBook Air, and 13-inch...
Read Full Article • 344 comments

Tuesday May 11, 2021 11:56 am PDT by Joe Rossignol
Last month, Apple introduced a new iPad Pro with the same M1 chip found in the latest Macs, and early benchmark results indicate that the M1 iPad Pro is over 50% faster than the previous-generation iPad Pro. Based on five legitimate Geekbench 5 results (here's the fifth) for the fifth-generation 12.9-inch iPad Pro with the M1 chip, the device has average single-core and multi-core scores of...
Read Full Article • 394 comments

Tuesday April 27, 2021 1:38 am PDT by Tim Hardwick
Apple's custom next-generation Mac processor entered mass production this month, claims a new report today from Nikkei Asia. Tentatively dubbed the "M2" after Apple's M1 chip, the processors take at least three months to produce and could begin shipping as early as July in time for incorporation in Apple's next line of MacBooks, according to the paper's sources. The next generation of Mac...
Read Full Article • 672 comments