Mac Pro's $400 Wheels Have No Locks to Prevent Rolling

Since launch, Apple's Mac Pro has been the butt of jokes because of some of its expensive add-ons, such as the option to purchase wheels for an additional $400. 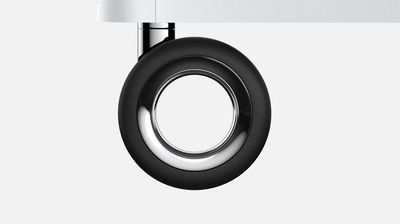 As pointed out by MKBHD in a review published this morning, those super pricy wheels have no locking mechanism, which could be major problem if a wheel-equipped ‌Mac Pro‌ is placed on a desk or a slick floor.

#protip don't get the wheels if you keep this thing on your desk. There's no locks. pic.twitter.com/NfkqQiNKYC — Marques Brownlee (@MKBHD) February 26, 2020

In a demonstration video, MKBHD shows the ‌Mac Pro‌ rolling freely on a slick floor because of the lack of wheel locks.

Those who want to secure their wheeled ‌Mac Pro‌ models will need to use some kind of stopper to prevent accidents, though no lock won't be an issue on many surfaces as long as the ‌Mac Pro‌ is on the floor.

Right now, wheels have to be purchased as a $400 add-on when ordering a ‌Mac Pro‌ for the first time, but in a recent technical overview of the Mac Pro, Apple confirmed plans to begin offering feet and wheels as a "customer installable kit" in the future.
Related Roundup: Mac Pro
Buyer's Guide: Mac Pro (Don't Buy)
Related Forum: Mac Pro
[ 347 comments ]

rjp1
I almost feel bad for how out of touch they have become under Tim's leadership. Almost.
Score: 110 Votes (Like | Disagree)

bladerunner2000
$400 upgrade and no locks? Why does Apple continue to spit in the face of their consumers?
Score: 70 Votes (Like | Disagree)

cmaier
shove an iPod Sock under one of the wheels and you'll be fine.
Score: 37 Votes (Like | Disagree)

robjulo
Of course they don’t...form and price over function. Must be a Jony special. Prob the last thing he worked on.
Score: 36 Votes (Like | Disagree)

cknibbs
Come on guys - for the steal of a deal that these things are they can’t come with all the features. /s
Score: 34 Votes (Like | Disagree)

This feels like the kind of thing Steve Jobs would have thrown a fit over.
Score: 33 Votes (Like | Disagree)
Read All Comments