In a new interview, two Apple executives have offered a deeper dive into the iPhone 14's new Crash Detection feature, which can detect if a user has been involved in a car accident and automatically contact emergency services and contacts. 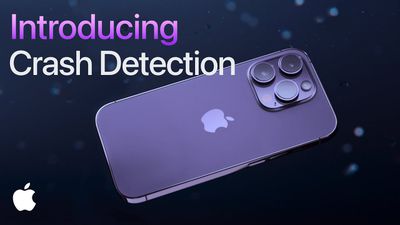 During the interview with TechCrunch's Brian Heater, Apple's vice president of worldwide iPhone product marketing, Kaiann Drance, and the company's vice president of sensing and connectivity, Ron Huang, shed some light on the technical aspects of how the latest ‌iPhone‌ and Apple Watch models actually detect a car crash.

The latest devices include updated sensors that can detect sudden changes in motion and pressure, along with other data types from the ‌iPhone‌, to trigger an alert. The updated accelerometer in the latest ‌iPhone‌ models can measure G-force measurements of up to 256Gs. As Apple was developing the feature, it required a "fundamental understanding of what is experienced during a crash," said Huang in the interview. "In these crashes, you see impact forces over 100Gs. We started around 256Gs. Any time you try to increase that range, there are trade-offs, in terms of precision at the higher range and the power costs. It took the team a lot of work to build the sensors in this way."

Alongside data from the gyroscope and accelerometer, the ‌iPhone‌ uses multiple other variables to understand if a user is moving in a car and if they've been involved in an accident. "There's no silver bullet, in terms of activating crash detection," said Huang, adding that there is no set number of factors that must be present before Crash Detection is triggered and emergency services are contacted.

There are some car accidents in which the ‌iPhone 14‌ or newer Apple Watch models may deliberately not contact emergency services. "I actually had a rear-end fender bender when I was in New York earlier. My crash detection did not go off," Drance said. "It's just one of those minor things where you just get out of your car and keep going. That's part of the sensor fusion and accuracy, because we don't want to be doing a lot of false calls to 9-1-1 when they're not necessary."

Despite Apple's efforts to reduce false calls to emergency services, reports have emerged that ‌iPhone 14‌ devices are calling emergency services when users are riding a roller coaster. The false alarm calls are likely a result of the ‌iPhone 14‌'s sensors falsely interpreting the sudden braking and movement of the ride as a collision with another vehicle. Other factors the ‌iPhone‌ uses include noise, such as engine or road noise, as well as Wi-Fi routers near an ‌iPhone‌ rapidly changing as a result of being in a moving vehicle.

Huang also touched on how Apple tested Crash Detection, noting the company placed the ‌iPhone‌ in many places around a car, equipped with cameras to analyze the impact. Apple also looked at data from the Department of Transportation and the National Highway Traffic Safety Administration to understand what types of accidents are the leading causes of injuries.

We put iPhones in many different places throughout the car — on the dummies and the car itself and mounts and so forth. And then we collect all of the raw sensor data coming from these devices during such a crash. We put cameras inside and outside the cars, as well, so from the footage, you can time the actual impact, what the pressure sensors see when the airbag goes off in slow motion. We're able to look at data in high fidelity. We also look at DATA from the Department of Transportation or the NHTSA (National Highway Traffic Safety Administration) to understand what kinds of crashes are the leading causes of injuries.

If it's not a "straight equation" why offer it? At this point, it will be best to offer users to manually toggle the crash detection off more easily. It seems like this feature is still in the pre-mature stages. It needs work!

There was so little for Apple to promote as a reason to buy the iPhone, they were grasping at straws and a half-baked crash detection feature seemed like a good idea at the time.
Score: 19 Votes (Like | Disagree)

TheYayAreaLiving ?
If it's not a "straight equation" why offer it? At this point, it will be best to offer users to manually toggle the crash detection off more easily. It seems like this feature is still in the pre-mature stages. It needs work!
Score: 15 Votes (Like | Disagree)

2. Apple could make the crash-detection feature "opt-in," and require anyone who opts in to first read some splash screens about the importance of disabling the feature when you visit amusement parks, and how to disable the feature. Of course, some people will forget to do this, so...

3. Apple could automatically disable the feature while a user is in an amusement park. Apple knows where all the amusement parks are (because Apple Maps) and location services are required to be enabled to use crash detection, so this seems an easy way to eliminate many false positives.
Score: 12 Votes (Like | Disagree)

goonie4life9
I love it when a good Project Titan comes together….
Score: 11 Votes (Like | Disagree)

Wildkraut
„We put iPhones in many different places throughout the car — on the dummies and the car itself and mounts and so forth.“

Yeah, but not in a roller coaster!
Yeah Tim, you could have tested it on the Oktoberfest, instead of drinking ? all day long.

”For the full crash detection experience, upgrade to the Apple Car.”
Score: 9 Votes (Like | Disagree)
Read All Comments