The larger Apple Watch Series 8 model expected to arrive later this year is rumored to feature a titanium casing, raising questions about the future of the Apple Watch Edition. 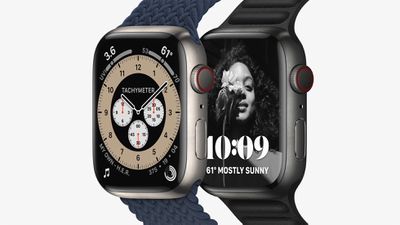 Yesterday, Bloomberg's Mark Gurman reported that the new, larger Apple Watch model scheduled to launch this year will feature a casing made of "a more durable formulation of titanium to make it extra rugged."

Now, a wide range of rumors point toward the launch of an all-new high-end Apple Watch model later this year. The device is expected to feature a larger display, longer battery life, a ruggedized casing, and a completely new design. Potential names for the device include "Apple Watch Pro" or "Apple Watch Explorer Edition," and the device has been associated with extreme sports, athletes, hikers, and other users that require a more durable watch.

Earlier this month, display analyst Ross Young said that the new high-end Apple Watch is expected to sell in comparatively low volume – just like previous reports of low sales for the Apple Watch Edition models due to their high price point. Apple is purportedly expecting to ship just one million units of the larger Apple Watch in the third quarter of this year, compared to four million 45mm ‌‌Apple Watch Series 8‌‌ models.

Beyond pricing and positioning in the market, Gurman's confirmation of a titanium casing for this year's new high-end Apple Watch model is the best indication yet that Apple may be planning to effectively fold the current Apple Watch Edition line into this new product category. This would allow it to continue to offer a titanium casing, but more overtly tout the weight and strength advantages of the material amid a focus on durability at a higher price point.

It will be best if Apple just brings back the Ceramic Apple Watch.
Score: 22 Votes (Like | Disagree)

Adreitz
I always hated that "Edition" branding. It needs an adjective or it just sounds pretentious (or worse, like Apple Watch Addition).

Either way, technology of this small form factor is changing so rapidly that it doesn't seem worth it to me to invest in expensive materials. Your solid gold series 0 Apple Watch Edition is now an expensive paper weight.

Plus, the screen is the more obvious point of failure than the case. Put a raised lip around it, Apple!
Score: 19 Votes (Like | Disagree)

Although I will die a little inside knowing I never got a chance to buy a ceramic white Apple Watch before I die.
Score: 16 Votes (Like | Disagree)

If you get the natural titanium it will show the scuff however they can easily be buffed out without damaging the watch. I decided to go back to the space black titanium and it does not show any type of scratches or scuffing. Honestly, Titanium feels amazing due to its durability and being so lightweight. It does have the premium look compared to aluminum.
Score: 12 Votes (Like | Disagree)

zubikov
Apple does a piss-poor job of marketing the higher-end edition watch benefits. Many ppl just don't know what they're getting in regular vs edition watches, and only understand that they are shinier. Apple needs to make it clear that:

- DLC coating on black Hermes watches is damn near indestructible, and is far different that the scratch-prone stainless finish
- All edition watches have sapphire
Score: 11 Votes (Like | Disagree)

Although I will die a little inside knowing I never got a chance to buy a ceramic white Apple Watch before I die.

They are on eBay.
Score: 9 Votes (Like | Disagree)
Read All Comments