It took until April to get official word, but we finally have a few details on the 2022 edition of Apple's Worldwide Developers Conference. WWDC will once again be a free online event for all developers, and we can expect to see lots of software announcements and perhaps a few hardware ones too, if we're lucky. 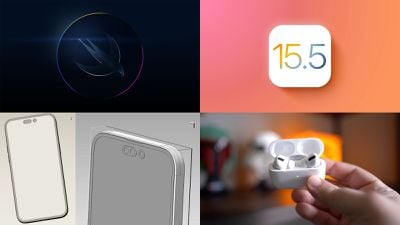 Other news this week included the start of a new cycle of operating system betas with iOS 15.5, macOS Monterey 12.4, and more, as well as some fresh rumors about the iPhone 14 Pro Max and AirPods Pro 2, so read on for details on these stories and more!

Apple this week announced that its annual Worldwide Developers Conference (WWDC) is returning June 6 through June 10. For the third consecutive year, the event will take place in an online format, but a limited number of developers will be able to apply to attend an in-person viewing party for the Keynote and State of the Union videos at Apple Park.

As usual, expect Apple to unveil its latest software platforms, including iOS 16 for the iPhone, iPadOS 16 for the iPad, macOS 13 for the Mac, watchOS 9 for the Apple Watch, and tvOS 16 for the Apple TV. Hardware announcements sometimes occur at WWDC too, with rumors suggesting that a new Mac Pro with Apple silicon may be previewed this year.

Apple finally seeded the first betas of iOS 15.5 and iPadOS 15.5 to developers and public beta testers this week. As usual, a handful of new features and changes have been discovered.

While we are still around five months away from Apple unveiling its "iPhone 14" lineup, rumors are starting to ramp up about the devices.

The latest rumor suggests that the iPhone 14 Pro Max will feature 20% thinner bezels around the display, if leaked CAD drawings prove to be accurate. iPhone 14 Pro models are also rumored to feature a 48-megapixel main camera lens with a wider sensor.

Five Years Ago, Apple's Uncharacteristic Apology Set the Stage for the Mac's Renaissance

Five years ago, the Mac lineup was in a bad state. Over three years had passed since Apple had redesigned the Mac Pro with a sleek but constrained "trash can" enclosure, while the iMac, MacBook Air, and Mac mini had also gone years without updates.

Then came along Apple's uncharacteristic apology to pro Mac users, which set the stage for the Mac's renaissance over the past few years.

AirPods Pro 2 Expected to Launch in Second Half of 2022

Nearly two and a half years after Apple introduced the AirPods Pro, new ones may finally be on the horizon, if the latest rumor is to be believed.

Apple plans to release second-generation AirPods Pro in the second half of 2022, according to reputable analyst Ming-Chi Kuo. Rumors suggest the new AirPods Pro could have a more compact design, motion sensors for fitness tracking, and many other new features.

Apple in March came out with the updated 2022 iPhone SE, a budget iPhone that's equipped with 5G. Samsung also recently came out with its own budget 5G smartphone, the Galaxy A53 5G, so in one of our latest videos, we compared the two to see how they measure up.

In short, the A53 5G is offering up a better feature set, but it can't match the iPhone SE in terms of lifespan and build quality.

Even as a photographer, I can't understand why phone companies insist on cramming high megapixel sensors in their devices. Many relatively high-end lenses from respected manufacturers struggle to resolve 48 megapixels. The tiny optics housed in a phone don't stand a chance. I also don't know anybody who creates 40+ inch prints from their iPhone photos. Most of the data is wasted and ends up needlessly filling the drive.

Even if we like the all-in-one iPhone for its capabilities, I don't see why Apple can't sell a external 8K capable camera with better optics/sensor that you interface with a iPhone to use its processing and storage. Hey If Apple can pair a Watch they can do other things to pair with their products.
Score: 3 Votes (Like | Disagree)

mrr
Next to the Safari, people spend more time in Apple mail. Apple mail has not been updated in a bazillion years. I would like to see some significant feature updates to Apple mail.
Score: 2 Votes (Like | Disagree)

You mean 7 Plus? :) I used iPhone 7 for 4+ years and it worked absolutely perfectly (would still use it, had I not been given an 11 pro at work). But I have to say, the camera upgrades on newer phones are fantastic; clearer details, contrast & image improvements, low-light situations are a night & day difference (literally). Addition of wide angle lens on pro is great too.
Score: 2 Votes (Like | Disagree)

Camera enhancements are the only reason I upgrade. Wouldn’t be shocked if there were many millions more like me who are into making photographs.
Score: 2 Votes (Like | Disagree)

Nathan King
Even as a photographer, I can't understand why phone companies insist on cramming high megapixel sensors in their devices. Many relatively high-end lenses from respected manufacturers struggle to resolve 48 megapixels. The tiny optics housed in a phone don't stand a chance. I also don't know anybody who creates 40+ inch prints from their iPhone photos. Most of the data is wasted and ends up needlessly filling the drive.
Score: 2 Votes (Like | Disagree)
Read All Comments