Apple has quietly nixed all mentions of CSAM from its Child Safety webpage, suggesting its controversial plan to detect child sexual abuse images on iPhones and iPads may hang in the balance following significant criticism of its methods. 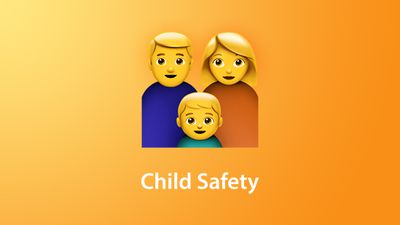 Following their announcement, the features were criticized by a wide range of individuals and organizations, including security researchers, the privacy whistleblower Edward Snowden, the Electronic Frontier Foundation (EFF), Facebook's former security chief, politicians, policy groups, university researchers, and even some Apple employees.

The majority of criticism was leveled at Apple's planned on-device CSAM detection, which was lambasted by researchers for relying on dangerous technology that bordered on surveillance, and derided for being ineffective at identifying images of child sexual abuse.

However, despite Apple's efforts, the controversy didn't go away. Apple eventually went ahead with the Communication Safety features rollout for Messages, which went live earlier this week with the release of iOS 15.2, but Apple decided to delay the rollout of CSAM following the torrent of criticism that it clearly hadn't anticipated.

Apple said its decision to delay was "based on feedback from customers, advocacy groups, researchers and others... we have decided to take additional time over the coming months to collect input and make improvements before releasing these critically important child safety features."

The above statement was added to Apple's Child Safety page, but it has now gone, along with all mentions of CSAM, which raises the possibility that Apple could have kicked it into the long grass and abandoned the plan altogether. We've reached out to Apple for comment and will update this article if we hear back.

Update: Apple spokesperson Shane Bauer told The Verge that though the CSAM detection feature is no longer mentioned on its website, plans for CSAM detection have not changed since September, which means CSAM detection is still coming in the future.

"Based on feedback from customers, advocacy groups, researchers, and others, we have decided to take additional time over the coming months to collect input and make improvements before releasing these critically important child safety features," Apple said in September.

Jim Lahey
If I ever find out this has been surreptitiously added without my knowledge then I will sell every Apple device I own and never buy another. Anyone who doesn’t have an issue with this has no clue of the concept of mission creep. If these systems are allowed to exist then it’s only a matter of time before the Feds batter your door in for having a [insert future dictator here] meme in your iCloud library. The road to hell is paved with good intentions.
Score: 62 Votes (Like | Disagree)

entropys
Good too much potential for abuse (and I am not saying that ironically).
Score: 46 Votes (Like | Disagree)

DaveFlash
better, this was bound to fail at the start, you'd only need one bad actor feeding apple's system wrong hashes and everyone is a potential suspect for whatever governmental purpose that bad actor wants to silence, like criticism, dissent, protestors in Hong Kong, LGBT minorities in certain regions you name it. Also, as an EU citizen, I'm glad, as this system Apple proposed, wouldn't have been allowed here anyway because of the strong protections in our GDPR privacy laws.
Score: 31 Votes (Like | Disagree)

DMG35
This was a mess from the beginning and pulling it was the only logical thing to do.
Score: 25 Votes (Like | Disagree)

Solomani
Good. It is only right that Apple should listen to its userbase.
Score: 23 Votes (Like | Disagree)