More than a dozen prominent cybersecurity experts hit out at Apple on Thursday for relying on "dangerous technology" in its controversial plan to detect child sexual abuse images on iPhones (via The New York Times). 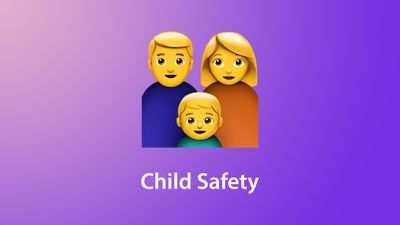 The damning criticism came in a new 46-page study by researchers that looked at plans by Apple and the European Union to monitor people's phones for illicit material, and called the efforts ineffective and dangerous strategies that would embolden government surveillance.

According to the researchers, documents released by the European Union suggest that the bloc's governing body are seeking a similar program that would scan encrypted phones for both child sexual abuse as well as signs of organized crime and terrorist-related imagery.

"It should be a national-security priority to resist attempts to spy on and influence law-abiding citizens," said the researchers, who added they were publishing their findings now to inform the European Union of the dangers of its plan.

"The expansion of the surveillance powers of the state really is passing a red line," said Ross Anderson, a professor of security engineering at the University of Cambridge and a member of the group.

Aside from surveillance concerns, the researchers said, their findings indicated that the technology was not effective at identifying images of child sexual abuse. Within days of Apple's announcement, they said, people had pointed out ways to avoid detection by editing the images slightly.

"It's allowing scanning of a personal private device without any probable cause for anything illegitimate being done," added another member of the group, Susan Landau, a professor of cybersecurity and policy at Tufts University. "It's extraordinarily dangerous. It's dangerous for business, national security, for public safety and for privacy."

The cybersecurity researchers said they had begun their study before Apple's announcement, and were publishing their findings now to inform the European Union of the dangers of its own similar plans.

Apple has faced significant criticism from privacy advocates, security researchers, cryptography experts, academics, politicians, and even employees within the company for its decision to deploy the technology in a future update to iOS 15 and iPadOS 15.

However, when it became clear that this wasn't having the intended effect, Apple subsequently acknowledged the negative feedback and announced in September a delay to the rollout of the features to give the company time to make "improvements" to the CSAM system, although it's not clear what they would involve and how they would address concerns.

Apple has also said it would refuse demands by authoritarian governments to expand the image-detection system beyond pictures of children flagged by recognized databases of child sex abuse material, although it has not said that it would pull out of a market rather than obeying a court order.

If Apple want to promote themselves as Privacy focused. They deserve every bit of criticism for this ridiculous idea.

They brought it on themselves.
Score: 171 Votes (Like | Disagree)

Apple has also said it would refuse ('https://www.macrumors.com/2021/08/09/apple-faq-csam-detection-messages-scanning/') demands by authoritarian governments to expand the image-detection system beyond pictures of children flagged by recognized databases of child sex abuse material, although it has not said that it would pull out of a market rather than obeying a court order.

I just don’t see how Apple thinks this is even feasible. How do they expect to ignore the laws of a local government?

The whole idea of scanning content locally on someone’s phone is a terrible idea that will eventually be abused.
Score: 88 Votes (Like | Disagree)

If Apple want to promote themselves as Privacy focused. They deserve every bit of criticism for this ridiculous idea.

They brought it on themselves

LV426
“Apple has also said it would refuse ('https://www.macrumors.com/2021/08/09/apple-faq-csam-detection-messages-scanning/') demands by authoritarian governments to expand the image-detection system”

Apple cannot refuse such demands if they are written into a nation’s law, so this is a worthless promise. The UK government has the power (since 2016) to compel Apple – amongst others – to provide technical means of obtaining the information they want. But, worse than that, Apple are not permitted to divulge the fact that any such compulsion order has been made. They must, by law, keep those measures secret. It’s all very very Big Brother.
Score: 58 Votes (Like | Disagree)

lot of confusion/scare mongering here, they are not scanning phones. They are looking at photos that are on Apple servers. How can anyone object to this unless you have something to hide, why would you object when it helps children?

Because it’s the beginning of a slippery slope of scanning your device for anything else that some group can think of. Phones are now nothing but trackers for big tech and governments to abuse.
Score: 54 Votes (Like | Disagree)

lot of confusion/scare mongering here, they are not scanning phones. They are looking at photos that are on Apple servers. How can anyone object to this unless you have something to hide, why would you object when it helps children?

Are you sure?;
Announced in August ('https://www.macrumors.com/2021/08/05/apple-new-child-safety-features/'), the planned features include client-side (i.e. on-device) scanning of users' iCloud Photos libraries for Child Sexual Abuse Material (CSAM), Communication Safety to warn children and their parents when receiving or sending sexually explicit photos, and expanded CSAM guidance in Siri and Search.
Score: 45 Votes (Like | Disagree)
Read All Comments

Wednesday August 18, 2021 1:13 pm PDT by Juli Clover
Developer Asuhariet Yvgar this morning said that he had reverse-engineered the NeuralHash algorithm that Apple is using to detect Child Sexual Abuse Materials (CSAM) in iCloud Photos, posting evidence on GitHub and details on Reddit. Yvgar said that he reverse-engineered the NeuralHash algorithm from iOS 14.3, where the code was hidden, and he rebuilt it in Python. After he uploaded his...
Read Full Article • 215 comments

Friday March 25, 2022 4:46 am PDT by Tim Hardwick
European lawmakers have provisionally agreed upon a new law that would force Apple to allow user access to third-party app stores and permit the sideloading of apps on iPhones and iPads, among other sweeping changes designed to make the digital sector fairer and more competitive. The European Council and European Parliament said on Friday they had reached a political agreement on the...
Read Full Article • 576 comments