A year ago today, Apple's AirPods Max launched, marking the company's first push into the high-end over-ear headphones market under its own brand name. One year later, rumors about a successor are thin on the ground, but there have been some indications about what customers can expect from ‌AirPods Max‌ 2. 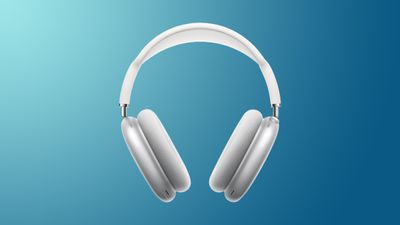 A report from Bloomberg's Mark Gurman said that ‌AirPods Max‌, thought at the time to be called "AirPods Studio," had suffered from several development challenges, such as problems with the headband being too tight, leading to multiple delays and scaling back of functionality.

It was initially believed that ‌AirPods Max‌ would offer unique customizability with interchangeable headbands and earcups, repeating the concept behind Apple Watch bands. Amid these delays and development issues, Bloomberg predicted that Apple would drop the concept of a replaceable headband to accelerate production.

Evidence of this concept can be seen in the final ‌AirPods Max‌ design. Users can easily remove the headband from AirPods Max without any disassembly of the headphones. To do this, users simply need to remove the magnetic ear cushions, fold the earcups flat, and insert a SIM card ejector tool into a small hole above the speaker.

Image via Prelook
Once the earcups are removed, the spokes on either side of the headband reveal a small Lightning-style connector for transferring power, and potentially data, between the earcups. It is possible that this system for removing the headband is a remnant of the original, more modular approach to ‌AirPods Max‌.

Moreover, it was believed that ‌AirPods Max‌ would have left and right ear detection so users could reverse the headphones' orientation, as well as touch pads on the earcups for controls. This appears to have been replaced by the Digital Crown from the Apple Watch in the final product. It seems plausible that some of these features, including greater customization, could come to the second iteration of ‌AirPods Max‌.

The last we heard about the next-generation ‌AirPods Max‌ was a report from Bloomberg's Mark Gurman in May of this year, which explained that Apple was not actively working on a new model, but had considered launching new colors.

With the ‌AirPods Max‌ now being a year old, Apple could choose to refresh the device with new color options. The company has chosen to do this with other products, such as the iPhone 12 and the HomePod mini, and it would now be particularly fitting for the ‌AirPods Max‌ given the general disarray of Apple's current offering of colors across its devices.

Still overpriced and inferior to the Sony XM 4's.

Overpriced maybe but personally I found it to be much better than the XM4s. Sound is more balanced and not as bass heavy. Noise cancellation has been just a bit better. Transparency mode is miles ahead of anything I’ve tried. The build quality is much much better with no plastic squeaks and the ear cups are much more comfortable and breathable. The hardware buttons and iOS controls are also way better than the touch controls on the XM4 and Sony’s barely usable app. I wouldn’t buy it for the original price but I think it was definitely worth the $380 I paid on eBay.
Score: 18 Votes (Like | Disagree)

why would headphones need a notch? lol where it even go

nutmac
As Bloomberg reported, Apple is not actively working on AirPods Max 2. But if it is in development, I would like to see:

Drop price to $399 or kill the product. It's clearly a dud because retailers keep slashing prices on it.
Score: 9 Votes (Like | Disagree)

KaliYoni
What, no notch???
Score: 8 Votes (Like | Disagree)
Read All Comments