Apple's newly-announced AirPods Max over-ear headphones reportedly omitted a number of features to launch after months of delays, according to Bloomberg's Mark Gurman. 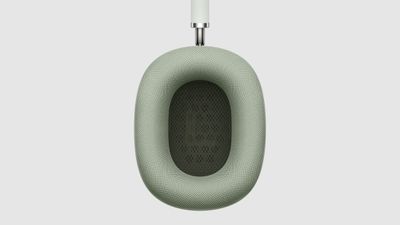 Earlier in the year, a report from Bloomberg said that ‌AirPods Max‌, thought at the time to be called "AirPods Studio," had suffered several development challenges leading to multiple delays and scaling back of functionality. The product failed to appear at any of the most recent three Apple events despite a plethora of rumors about the product.

In September, the design of ‌AirPods Max‌ leaked in a video, indicating that the launch was likely to be soon. The headphones were meant to go into production in mid-2020, but production was pushed back due to development issues, such as problems with the headband, which was found to be too tight during testing.

It was believed that ‌AirPods Max‌ would offer unique customizability with interchangeable headbands and earcups, repeating the concept behind Apple Watch bands. Amid these delays and frustrations, Bloomberg correctly predicted that Apple would drop the concept of a replaceable headband to accelerate production.

In addition, it was believed that ‌AirPods Max‌ would have touch pads for controls on the sides of the headphones. This appears to have been replaced by the Digital Crown from the Apple Watch in the final product.

After the announcement of ‌AirPods Max‌ earlier today, ‌Mark Gurman‌ mused on the fact that Apple had dropped a large number of features to get the product released at long last.

Looks like they made some changes on these to get them out the door as was deemed likely after several development set backs over the past many months — not seeing swappable bands, and Apple Watch Digital Crown instead of touch panels, and left and right sides aren’t reversible. — Mark Gurman (@markgurman) December 8, 2020

Other rumors about Apple's over-ear headphones also failed to come to fruition. Mixed-record leaker Jon Prosser repeatedly said that ‌AirPods Max‌ would come in a "sport-like variant" for $350 and a "luxury variant" for $599. While Prosser's $599 was not far off the final $549 price tag, the cheaper $350 "sport variant" has yet to emerge.

9to5Mac also incorrectly claimed that ‌AirPods Max‌ would have a "neck detection" feature and adaptive audio channels for switching between the right and left side, allowing users to use the headphones either way around.

Last week, MacRumors correctly predicted that Apple would announce a new product today using an AppleCare-related internal memo. With ‌AirPods Max‌ finally announced, it is possible that Apple may look to revisit some of these rumored features for a second iteration of the product, or shelve them entirely.

Bazooka-joe
Maybe in the interest of profit, Apple have rushed to market to capitalise and may introduce a second generation of Max and possibly Pro next year with additional functionality. I am certainly going to wait. Too much money for not enough product.
Score: 14 Votes (Like | Disagree)

TheYayAreaLiving ?
They're way too expensive! Come on Apple.
Score: 10 Votes (Like | Disagree)

Rogifan
So basically Gurman got a rumor wrong and is spinning it as missing features.
Score: 7 Votes (Like | Disagree)

Lemon Olive
Gurman will say anything to avoid being wrong.

No one in their right mind could possibly think that the Digital Crown was anything but a major design preference and not something thrown in to replace touch controls.
Score: 6 Votes (Like | Disagree)

dz5b609
Wait, you really telling me it doesn't have ****ing ear/neck detection?!? The feature that literally any other headphone even the 50 dollar Chinese ones have...

Friday July 16, 2021 11:55 am PDT by Mitchel Broussard
AirPods Max have now reached a full $100 off their original price tag of $549.00, available only on Adorama as of writing. You can get all AirPods Max colors for $449.00 during this sale, including Pink, Silver, Sky Blue, Green, and Space Gray. Note: MacRumors is an affiliate partner with Adorama. When you click a link and make a purchase, we may receive a small payment, which helps us keep...
Read Full Article • 89 comments

Deals: Amazon Has AirPods Max at the Best Price This Year ($429 in Two Colors) [Update: Sold Out]

Thursday December 2, 2021 7:21 am PST by Mitchel Broussard
We've been keeping an eye on AirPods deals in the wake of Black Friday, and before today only the AirPods 3 have seen a return of Black Friday pricing. However, Amazon now has the AirPods Max at their best price of the year of $429.00 in Sky Blue and Space Gray, down from $549.00. Note: MacRumors is an affiliate partner with Amazon. When you click a link and make a purchase, we may receive a...
Read Full Article • 31 comments

Tuesday July 20, 2021 6:32 am PDT by Mitchel Broussard
Following a $100 off deal on AirPods Max from Adorama last week, Amazon and Best Buy today are following up with a solid second-best offer on the high-end headphones. You can get the AirPods Max for $454.99, down from $549.00 ($94 off). Note: MacRumors is an affiliate partner with these vendors. When you click a link and make a purchase, we may receive a small payment, which helps us keep the...
Read Full Article • 27 comments