Following the last-minute rumor that Apple's upcoming new MacBook Pro models could feature a notch at the top of the display, much of the online discussion has involved concerns that such a notch would encroach on the active screen area, potentially eating into the macOS menu bar. 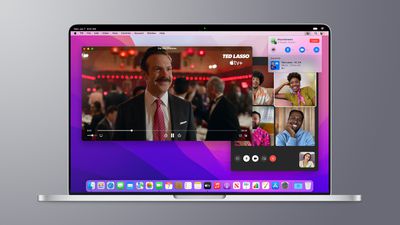 MacRumors concept render of notched MacBook Pro display
However, it's worth noting that Apple has explored ways of including a notch in a MacBook Pro display that would avoid ingression into the main screen area, make the notch appear seamless against a black strip, and potentially allow for additional information to be displayed to the user that would also free up menu bar space in the main 16:10 display.

For example, an Apple patent filed in 2019 with the U.S. patent office, titled "Electronic Device Display With Extended Active Area," describes, among various embodiments, a laptop computer featuring a main rectangular screen and two "extended regions" between the screen and an inactive border, wherein "the first and second rectangular extended regions are on opposing sides of the camera."

"The first and second extended regions may be located on opposing sides of a camera or other electrical component in a protruding portion or island-shaped portion of the inactive region. Icons or other information may be displayed on a black background in the extended regions, giving the display a continuous unbroken appearance."

Such an implementation could potentially add system status information in a black strip above the macOS menu bar, but that would of course require a significant adjustment to the way the menu bar operates on these new Mac models in the final release of macOS Monterey, and there's been no evidence of that so far.

The notch rumor, while seemingly sketchy on its own, has gained some traction since Friday, initially due to a discovery by MacRumors of screen resolutions that will feature in the redesigned 14-inch and 16-inch MacBook Pro models.

In the ‌macOS Monterey‌ beta, MacRumors uncovered potential display resolutions of 3024x1964 and 3456x2234 for the rumored 14-inch and 16-inch MacBook Pro models. When subtracting 74 pixels from the height of both, the resulting 3024x1890 and 3456x2160 resolutions work out to an aspect ratio of 16:10. All of Apple's current MacBooks feature a 16:10 aspect ratio, leading to speculation that the extra 74 pixels could be for a notch.

The possibility that Friday's rumor may have substance to it has further been bolstered by an alleged photo of a MacBook Pro screen with a notch that was originally shared by a Weibo account.

Apple is hosting a virtual event on Monday at 10 a.m. Pacific Time, with rumors widely suggesting the event will be focused on redesigned 14-inch and 16-inch MacBook Pro models with a faster version of the M1 chip, brighter mini-LED displays, MagSafe, and additional connectivity.

mixy
Here's a quick and dirty shop of how I think they are going to implement the notch. So instead of a big top bezel that does nothing but house the webcam, they are going to use that space to free up the menu bar and provide additional information, maybe allow apps to use it. So I don't think the notch is even going to be visible, everything under the notch area stays the same, we just get one more row of info on top of the existing interface. Win-win if you ask me.

Edit: Here's a more refined idea of the implementation. The menu bar could always be black or hidden with a wallpaper vignette. In edge cases where apps have a lot of menu items, a Safari tabs approach could be used to condense the spacing between them and shorten names (...).

DrDVil
Am I missing something?

According to the text in the patent the screen at both sides of the notch are not part of the main screen area, will be always black and are only used to display information (e.g. clock , battery status, etc.). So you can free space in the main screen area! So it seems like the menu will be below the notch, as usual, and the notch will not interfere with the normal screen.

So I don't see the problem at all! and since the new MacBook Pros are supposed to use mini led, the background of the extended region can be made pitch black!

Seems like a good use of otherwise unused space, if is implemented as described in the patent.

Editing photos and zooming in will be a nightmare with the black void on top :(

Surely the notch will only interfere with the menu bar.
Score: 18 Votes (Like | Disagree)

another.reader
Well… better off with a notch than with a big a$$ forehead.
Score: 13 Votes (Like | Disagree)
Read All Comments

Saturday October 16, 2021 7:43 am PDT by Joe Rossignol
Following a sketchy rumor that claimed the next MacBook Pro models could feature a notch at the top of the display, an alleged photo of a MacBook Pro with a notch was shared today by Weibo account AnyTurtle999, as spotted by Twitter account DuanRui. A close-up view of the alleged notch at the top of the image appears to show a FaceTime camera and an ambient light sensor for True Tone....
Read Full Article • 1096 comments

Friday October 15, 2021 8:22 am PDT by Hartley Charlton
Apple's redesigned MacBook Pro models could feature a notch containing the webcam, according to a sketchy last-minute rumor that is circulating online. MacRumors' render of a next-generation MacBook Pro with a notch. The rumor appears to have originated from a Weibo user in China, who stipulates that the redesigned MacBook Pro will feature a notch. It apparently has a size "similar to iPhone...
Read Full Article • 401 comments

Sunday October 24, 2021 12:35 pm PDT by Sami Fathi
The notch on the newly redesigned MacBook Pro offers a "smart way" to give users more room for their content and allowed Apple to make the bezels thinner and provide more screen real estate to customers, an Apple official has said during a recent media interview. The inclusion of a notch on the entirely revamped MacBook Pros was a surprise and was one of the few last-minute rumors that...
Read Full Article • 535 comments

Wednesday October 27, 2021 1:45 am PDT by Tim Hardwick
When Apple unveiled the new MacBook Pro models with a notch to house the camera in the thinner display bezel, many observers pointed out potential problems for third-party apps that place additional content across the menu bar, in the form of dropdown menus that extend from the left or menu items that extend from the right. The concern was that extended menus or menu items in the menu bar...
Read Full Article • 226 comments