MacBook Pro to Finally Get a Major Webcam Upgrade

Apple's upcoming redesigned MacBook Pro models are set to get a significantly improved webcam, in what could be a meaningful upgrade for users who rely on video calls, according to recent reports. 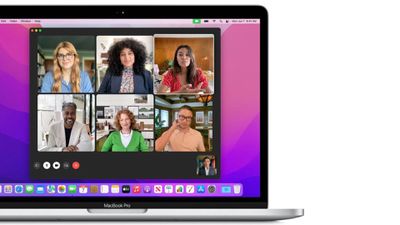 According to the leaker known as "Dylandkt," the MacBook Pro will feature a 1080p Full HD webcam for the first time, bringing a major image quality improvement.

Currently, the MacBook Pro and the MacBook Air feature a 720p "FaceTime HD" camera, which has been criticized by some users in recent years for delivering disappointing image quality. While the hardware of the ‌FaceTime‌ HD has not changed for several years, Apple says that the M1 chip in its latest computers contains a dedicated image signal processor that improves the webcam's quality.

The new 1080p Full HD webcam will reportedly become the standard across the Mac lineup as new machines, such as the redesigned ‌MacBook Air‌, are released. The 24-inch iMac is the latest model to sport a 1080p webcam for improved image quality.

Dylandkt has correctly predicted details about a number of Apple's recent product launches. As early as November 2020, Dylandkt claimed that the next-generation iPad Pro would feature an ‌M1‌ chip. This was five months before the device emerged. Before the launch of the 24-inch ‌iMac‌ earlier this year, ‌Dylandkt‌ correctly predicted that the new, redesigned ‌iMac‌ would replace the smaller entry-level ‌iMac‌ only and feature an ‌M1‌ chip rather than an M1X.

‌Dylandkt‌'s claim about the MacBook Pro's webcam may therefore be more believable, but it also just seems to be an overdue upgrade that would make sense to occur with the major redesign expected for the upcoming MacBook Pro models.

The new MacBook Pro models, which are believed to be available in 14 and 16-inch sizes, are expected to debut around October, offering new designs, brighter panels with higher contrast, function keys with no Touch Bar, more ports, and a MagSafe connector for charging. For more on what to expect, be sure to check out our dedicated MacBook Pro rumor guide.