Google and the three major U.S. carriers, including Verizon, AT&T, and T-Mobile, will all support a new communications protocol on Android smartphones starting in 2022, a move that puts pressure on Apple to adopt a new cross-platform messaging standard and may present a challenge to iMessage. 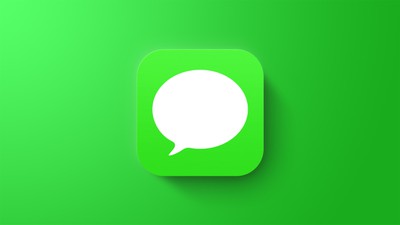 Verizon recently announced that it is planning to adopt Messages by Google as its default messaging service on Android devices, joining AT&T and T-Mobile. This means all three major carriers in the United States will support the Rich Communication Services (RCS) standard on Android devices as of 2022.

Apple has not implemented support for RCS, leaving iPhone users behind in terms of features when they cannot use iMessage. When RCS sees a complete Android rollout, text messages on Android phones will be end-to-end encrypted. ‌iPhone‌ to ‌iPhone‌ communications are end-to-end encrypted thanks to iMessage, but as a consequence of this change, texts between Android users and ‌iPhone‌ users will continue to be less secure because of Apple's decision to use SMS over RCS.

Senior vice president of Android Hiroshi Lockheimer told The Verge that Android versus ‌iPhone‌ messaging security will become an important discussion with the wider adoption of RCS. "The fallback messaging experience on the other platform will not have encryption if it's still SMS," he said. "I think that that is a pretty interesting dynamic and I would hope that as everyone focuses on security and privacy it becomes an important part of the discussion."

Lockheimer did not provide details on whether Google is discussing the implementation of RCS with Apple, but Apple has been invited to adopt the RCS standard. Apple has declined to comment on RCS, and there is no sign that Apple plans to adopt it in the near future. Even so, now that all three major carriers in the U.S. will support RCS, Apple may be more inclined to consider the technology to make cross-platform messaging more secure.

Apple never brought iMessage to Android despite considering it in 2013. Recently revealed court filings have shown that Apple believed that doing so would "hurt us more than help us." It is possible that similar logic is behind the decision to constrain cross-platform messaging by not adopting RCS, since it could diminish some of the desirability of iMessage.

Wednesday September 1, 2021 2:19 am PDT by Hartley Charlton
The iPhone 13 lineup will offer a revolutionary new feature that Android competitors have yet to be able to match, according to a late-stage report from the reliable analyst Ming-Chi Kuo. In a note to investors, seen by MacRumors, Kuo explained that the iPhone 13 contains a customized Qualcomm X60 baseband chip that supports low earth orbit (LEO) satellite communications. If enabled with the ...
Read Full Article

Saturday September 11, 2021 1:53 am PDT by Tim Hardwick
WhatsApp has announced it will give its two billion users the option to upload their chat backups to Apple's iCloud using password-protected encryption. Currently, WhatsApp on iPhone lets users back up their chat history to ‌iCloud‌, but messages and media that users back up aren't protected by WhatsApp's end-to-end encryption while in ‌‌Apple's cloud servers‌. Given that Apple...
Read Full Article • 65 comments

Friday August 20, 2021 1:38 am PDT by Tim Hardwick
Twitter says it is rolling out a number of changes to the way direct messages work, including the ability to send a direct message to several people in different conversations. Going forward, Twitter says users will be able to share the same tweet in up to 20 separate direct message conversations, which should ensure "no more (awkward) accidental group chats when you DM a tweet to multiple...
Read Full Article • 2 comments