Apple's new MagSafe Battery Pack will begin arriving to customers around the world this week, and one lucky person has already snagged one. 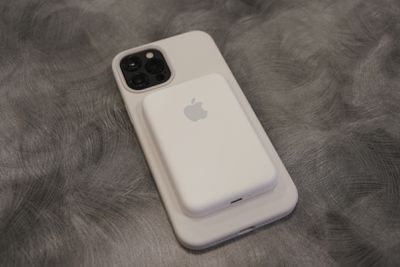 Steven Russell from Memphis, Tennessee said he managed to pick up the MagSafe Battery Pack from a local Apple Store over the weekend, and he has since shared photos on Reddit, providing a closer look at its design and thickness.

Russell shared some early impressions of the battery pack, noting that it is designed with hard but smooth plastic and has a very strong magnetic attraction to his iPhone 12 Pro, even with Apple's silicone MagSafe case on the device. He added that while the battery pack is quite thick, its rounded edges make it comfortable to hold.

When you attach the MagSafe Battery Pack to an iPhone 12 running iOS 14.7 or later, it will automatically begin to charge the iPhone and a charging status will appear on the Lock screen. iOS 14.7 is currently in beta and should be released within the next few days.

The MagSafe Battery Pack can be ordered on Apple's online store in a white color only and currently has a late July delivery estimate.

Update: Russell has also confirmed that the MagSafe Battery Pack can wirelessly charge AirPods, which is to be expected, as the battery pack is functionally equivalent to the MagSafe Charger in this regard.

One more thing to add. I have been asked if it wirelessly charges AirPods. Answer appears to be yes. pic.twitter.com/2WCcKSOlbI — Steven Russell (@stevenrussell) July 19, 2021

rpmurray
Holy cow! Apple should just make the phone a little thicker and put more battery in it, instead of selling a product that makes the phone look like a pregnant whale.
Score: 36 Votes (Like | Disagree)

sflagel
Let's understand what this is: it is a MagSafe Charger that, when needed, you can take with you to charge on the go. It is not an add-on, semi-permanent, battery.
I believe, and would love to see pictures, that this can be used as your standard overnight charging puck. But it also doubles as a separate battery pack, like the ones you buy at airports, or that come with your luggage and you always forget to charge the night before you have to fly.
This is a Battery Pack that is always charged, if you use it as your main MagSafe Charger, and you just pick it up on the way out.
Score: 26 Votes (Like | Disagree)

TGM85
Wow. That thing has all the elegance of a car roof box.
Score: 18 Votes (Like | Disagree)

falkon-engine
$99 is robbery. At $39, I could dig it. For $99 you can get a big boy Anker or other battery brand with several times the capacity and much more flexibility in terms of charging ports and # of devices you can charge simultaneously.
Score: 15 Votes (Like | Disagree)

Thursday July 22, 2021 2:27 pm PDT by Juli Clover
Apple's MagSafe Battery Pack designed for iPhone 12 models came out this week, and Charger Lab has taken one of the new accessories apart to give us a look at its inner workings. The teardown has detailed information on how the MagSafe Battery Pack works and what each component inside does. There are two charging coils inside, shielding for heat dissipation, and a magnetic ring that allows...
Read Full Article • 45 comments

Sunday June 26, 2022 7:36 am PDT by Joe Rossignol
iPhone 14 Pro models are widely expected to feature always-on displays that allow users to view glanceable information without having to tap to wake the screen. In the latest edition of his Power On newsletter for Bloomberg, Mark Gurman said the feature will include support for iOS 16's new Lock screen widgets for weather, fitness, and more. "Like the Apple Watch, the iPhone 14 Pro will be...
Read Full Article • 94 comments