It's finally here! Apple's annual Worldwide Developers Conference kicks off on Monday with the traditional keynote address at 10:00 a.m. Pacific Time. At the event, we'll undoubtedly see the unveiling of upcoming versions of Apple's operating systems like iOS 15 and macOS 12, and if we're lucky, perhaps some hardware like a redesigned MacBook Pro. 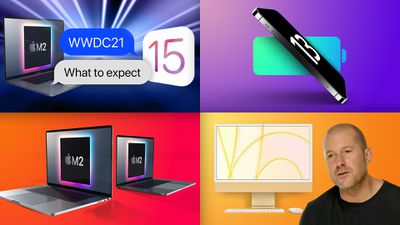 This week also saw a host of rumors about Apple's future iPad lineup, AirPods, and the iPhone 13, as well as an interesting tidbit that Jony Ive was involved in the design of the new M1 iMac, so read on for all of the details on these stories and more!

With WWDC kicking off on Monday, we've put together a look at what we can expect at the keynote event. We actually haven't seen a whole lot in the way of leaks this year, so there are likely to be plenty of surprises coming on Monday, but we'll certainly be seeing what Apple has planned for iOS 15, macOS 12, watchOS 8, and more.

It doesn't seem like we should be expecting much in the way of hardware, with Apple having already launched several new products over the past month or so, including AirTags, the M1 iMac, updated iPad Pro models, and the second-generation Apple TV 4K. But there's still a chance we could see some hardware announcements on Monday, with the most likely candidate being the MacBook Pro, so check out our guide and video overview of what to expect.

In advance of WWDC, MacRumors has discovered references to potential batteries for next-generation 14-inch and 16-inch MacBook Pro models in a Chinese regulatory database.

In a wide-ranging report touching on Apple's roadmap for most of its iPad lineup, Bloomberg's Mark Gurman this week reported that the next iPad Pro coming in 2022 is expected to adopt a glass back and support wireless charging, as well as reverse wireless charging that would allow it to charge other devices like iPhones and AirPods.

Gurman also says Apple is working on a new iPad mini for launch later this year that will have thinner bezels around the display and do away with the Home button. Apple is also planning a thinner version of the low-cost iPad.

While we're still a few months away from Apple unveiling its iPhone 13 lineup, filings spotted in a Chinese regulatory database this week suggest that the devices will have significantly larger batteries.

iPhone 13 Pro models are rumored to feature a power-hungrier 120Hz display, so larger batteries would help ensure that the higher refresh rate does not have too much of an impact on battery life relative to current iPhones.

Apple's former design chief Jony Ive left the company a few years ago to form an independent design company named LoveFrom. It was reported this week that Ive has recruited at least four other Apple employees to join his new design firm since his departure.

Another interesting tidbit about Ive: as part of its review of the colorful new iMac, Wired received confirmation from Apple that Ive was involved in the design of the computer.

Apple plans to release second-generation AirPods Pro next year, with a key new feature expected to be upgraded motion sensors for fitness tracking, according to Bloomberg's Mark Gurman.

Gurman added that third-generation AirPods are also planned for release later this year with a design mirroring the AirPods Pro. Apple is also said to be in the early stages of developing a smart home device that combines the features of a HomePod, Apple TV, and FaceTime camera.

On our YouTube channel this week, MacRumors videographer Dan Barbera went hands-on with the new 12.9-inch M1 iPad Pro released last month, and compared it to the previous-gen 2020 model to determine whether it's worth upgrading.

They invaded Poland. No wait, that was the other thing.
Score: 3 Votes (Like | Disagree)

magicschoolbus
I didn’t buy a m1 so I couldn’t use Memojis and have moveable Home Screen widgets.

full screen monitor support for the love of god….
Score: 2 Votes (Like | Disagree)

Please Apple, just fix Swift strings. Seriously, new professional laptops would be great and all. If you fixed strings, people all over the world would be celebrating in the streets. The party would be like the end of WW II.

RalfTheDog
Please Apple, just fix Swift strings. Seriously, new professional laptops would be great and all. If you fixed strings, people all over the world would be celebrating in the streets. The party would be like the end of WW II.
Score: 1 Votes (Like | Disagree)
Read All Comments