Apple is continuing to work on a future wireless charger that would function similarly to the now-abandoned AirPower, according to Bloomberg's Mark Gurman. 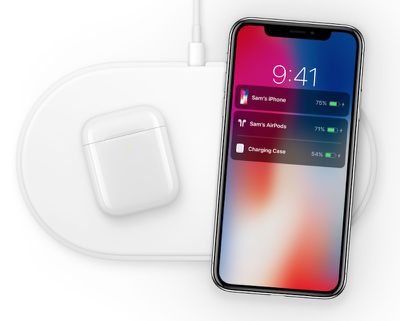 In a report outlining Apple's wireless charging ambitions, Gurman says that Apple is "still exploring" a wireless charger that would charge multiple devices like an iPhone, Apple Watch, and AirPods all at once.

Apple first announced the ‌AirPower‌ in September 2017 alongside the ‌iPhone‌ 8, 8 Plus, and ‌iPhone‌ X, and said that the charging product would launch sometime in 2018. No ‌AirPower‌ materialized in 2018 and after months of rumors of development issues, Apple canceled the project in March 2019.

The ‌AirPower‌ failed because Apple engineers were unable to solve multiple bugs affecting the device, including interference problems and issues with overheating. In 2020 alongside the iPhone 12, Apple instead unveiled MagSafe, a magnetic wireless charging alternative.

Since the ‌AirPower‌ was canceled, there have been persistent rumors that Apple is still working on some kind of charging mat, but most have been nebulous. Gurman's report is the clearest hint we've had yet that some kind of AirPower-like device could still come out in the future.

In addition to a wireless charger that's similar to the ‌AirPower‌, Apple is also said to be "internally investigating" alternative wireless charging methods that can work over greater distances. Work on long range charging is in the early stages, though, and it's likely to be several years before we see any kind of new long-range wireless charging technology from Apple.

i suspect it won't be a wireless charger but instead it'll be a multi-usb port charger where it efficiently routes the max power to the appropriate devices.

currently my anker 4 port 100W usb-c charger is a bit dumb. if i connect 2 usb-c devices, anker just delivers 50w to each device max. it's a bit stupid when you connect a MacBook Pro that wants 87W and an Apple Watch that only needs 5W max.

I suspect it won’t be a charger at all but a smart dough mixer for the kitchen. I have one but I have thought sometimes it could be smarter and identify the type of dough, adjusting speed and time accordingly and sending a notification to my phone when it’s ready.

Anyway, based on my current struggles I think that’s what Apple is doing, rather than what would be logical for them to be doing and that the insider is telling us they are doing.
Score: 19 Votes (Like | Disagree)

farewelwilliams
i suspect it won't be a wireless charger but instead it'll be a multi-usb port charger where it efficiently routes the max power to the appropriate devices.

currently my anker 4 port 100W usb-c charger is a bit dumb. if i connect 2 usb-c devices, anker just delivers 50w to each device max. it's a bit stupid when you connect a MacBook Pro that wants 87W and an Apple Watch that only needs 5W max.
Score: 10 Votes (Like | Disagree)

macduke
I'd love an iMac that has a wireless transmitter in the base that could keep my keyboard, mouse, AirPods, Apple Watch and iPhone charged during the day. Would only need a range of a meter or less. Something like that would also be great for a night stand. Just toss all your Apple crap on there and it charges.
Score: 5 Votes (Like | Disagree)

-BigMac-
Who even cares anymore.. airpower is like 3 year old news.

that’ll teach Apple to hype and announce before they even finalized a design:D
Score: 3 Votes (Like | Disagree)
Read All Comments

Friday January 14, 2022 10:44 am PST by Joe Rossignol
Bloomberg's Mark Gurman and Debby Wu last year reported that Apple had tested a new iPad Pro with a glass back for wireless charging capabilities. In a recent edition of his newsletter, Gurman said he expects the new iPad Pro to be released in 2022. While the new iPad Pro is still on track to feature wireless charging, 9to5Mac's Filipe Espósito today reported that Apple may have ultimately...
Read Full Article • 140 comments