Apple is developing a new iPad Pro that will feature wireless charging capabilities, reports Bloomberg. The upcoming ‌iPad Pro‌ will debut in 2022, following the updated M1 11 and 12.9-inch ‌iPad Pro‌ models that launched in May 2021. 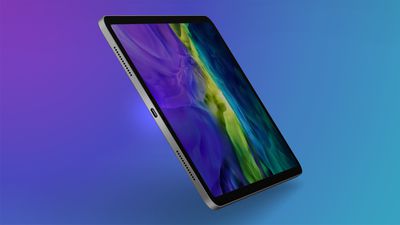 Current iPads still charge over USB-C or Lightning, but enabling wireless charging would bring the ‌iPhone‌ and iPad closer in functionality. Work on the new ‌iPad Pro‌ is still in the early stages, and Bloomberg warns that Apple's plans could change or be canceled before next year.

Apple is also working on reverse wireless charging for the new ‌iPad Pro‌, which would allow users to charge their iPhones, AirPods, and other accessories by laying them on the back of the ‌iPad‌. There were rumors that the ‌iPhone‌ 11 would feature bilateral wireless charging, but it didn't ultimately happen. Bloomberg says that Apple did indeed explore the feature for the ‌iPhone‌, however.

one more
While a glass back might look sleek, it will also add quite a bit of weight to an iPad, which is not so welcome for a portable device, IMO.
Score: 22 Votes (Like | Disagree)

macduke
Glass doesn't sound good on the iPad Pro. Maybe if they only use it in the Apple logo for charging passthrough. Glass is heavier, thicker, and easier to break—and all of those things are especially true when you massively increase the surface area like on an iPad Pro. I have no desire to have wireless charging on my iPad, especially because the Thunderbolt port isn't going anywhere due to the nature of the device.

Reverse charging sounds neat but I wonder how many people will actually use it. I think reverse charging on the iPhone, which is already glass, for the AirPods or Apple Watch seems a lot more useful. I'm more likely to run low on charge if I'm traveling and the iPhone comes with a USB-C to Lightning cable so you can just plug that into your iPad Pro to charge. I feel like a lot of people don't realize that.
Score: 20 Votes (Like | Disagree)

For people with Cancer or not wanting to get Cancer this is bad.

Some Day you'll care. when Cancer hits you.

I;m going with the Mac mini when the M1x model comes out.

live your life, a lot of things can kill you slowly or quickly
Score: 13 Votes (Like | Disagree)

DribbleCastle
People are gonna be super excited for a glass back.
Score: 10 Votes (Like | Disagree)

While a glass back might look sleek, it will also add quite a bit of weight to an iPad, which is not so welcome for a portable device, IMO.

Also another thing that can break. For what? putting a humongous 13" slab on a tiny wireless charger that outputs around 14W at best? The ****...
Score: 9 Votes (Like | Disagree)